It’s Labor Day with a chance of showers as I head over to Ag Hall for my 3:15 set. As usual, I really don’t know what to expect, but that’s the beauty of this gig. I do want to play I’m Part of the Union, though.

There’s only two shows today at the comfy Centennial Stage: my Fractured Folk and Mysterio, the Magician. I was set up with time to spare and got to chat with a few familiar faces. As the set progressed there were quite a few older couples that settled in. Several families filled in the spaces so I’m gonna have to mix the adult with the kids stuff. So much for my prepared set list. 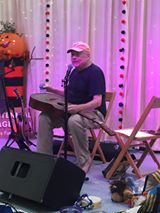 I noticed that, with these diverse audiences, I have mix in the chat, not only between songs, but I’m comfortable enough to comment during the songs. That’s different skill set and I was aware of that today. I don’t have to deliver the song straight through and allow some dialogue while I maintain the guitar strumming.

I pulled out Daddy Take a Nap, one I haven’t done in years. It’s a Loudon Wainwright III song that works well early in the set with a mixed audience like this. And it picks on dads. I introduced this, “Here’s a song I remembered that I forgot.” It got a big chuckle from the sound board and was asked about it after the show. As I was driving home, I recalled the phrase and sent it on to Jeanine, commenting that it’s rarely funny the second time. But her husband laughed the second time.

There was a family with two brothers, the older of which joined in and the younger was quite reticent. They were a great foil during the show, and after they did Thunder Tubes, they were all in for the whole show. Today I had my first four-piece Thunder Tube section. Pretty scary. 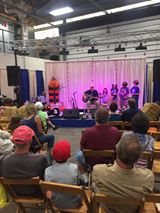 Thirty minutes into the set, a young girl asked if she could come up on stage and dance. To the amazement of everyone, including myself, I said sure. As she stood next to me, I suggested playing the rainbow bells and then suggested the scarves. She pulled out her favorite color, purple, and I started in on Name to the Animals. As I was delivering the song to the audience, she started dancing and playing with the scarf. It was interesting to watch the audience watch her (she was pretty good for her age) as I tried to engage the audience with the song. It turned out to be a pretty interesting performance piece, and commented at the end that this was something I hadn’t done since my barroom days. I suggested two scarves and she did. Other kids eventually came up and I finished the set with parents and grandparents videoing the whole mess.

Since this is a tips gig, I was surprised by the number of CDs and tips I got, making this a reasonably profitable day. And I entertained a wide variety of folks with my musical mix and conversation. Several folks came up to relate when they saw me play, some going back to the early ’70s.

It never did rain but I forgot to play I’m Part of the Union. Damn.