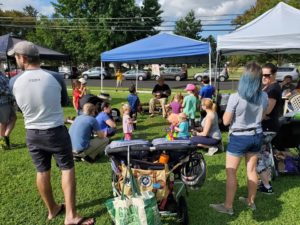 I had a good day on Saturday with the Rose Garden FM and a nice pickin’ party in the late afternoon. I woke up to another spectacular day, cool temps overnight, clear weather for my Saucon Valley FM at 9:30 in the morning. Again I set up early, changed the rest of my strings and settled in. Kids and families rolled up pretty quickly so I had to launch in with the kids stuff early, with little time to let my strings adjust. But, the bag emptied out early and the kids were engaged while the parents chatted with their friends while we played.

One family had a bunch of requests that helped me round out my set: I’m Gonna Tell, Jimalong Josie, Tropical Vacation and some others that I don’t normally perform. That was a great exercise and always a way to find out which songs the kids gravitate to, outside of the “hits”. There were some pretty funny exchanges with the adults over the set, and that helps me stay in the game. As the kids moved on, I had a chance to lean into my more folk-rock material and let the few kids left wail on tambourines, et al.

Lately, I’ve been selling CDs and getting some good $1 tips from families, a few vendors and the occasional older woman who appreciates what I do with the kids.

I packed up, put stuff in the car and cruised the market. Picked up some shrooms and a shallot from the mushroom man who wants more Little Feat (he used to produce rock concerts toward Philly), a fresh biscuit and a can of mead for later tonight.

It was another good session at the market.