This gig came out of nowhere, and these gigs are usually the most interesting. I was contacted by Mill Jonakait months ago for a summer kids/family gig in the Poconos, and I was recommended by Martin Guitar! Craig Thatcher and Nyke Van Wyk were to be part of the package so it was a no-brainer for me. It was on the books for months, so it finally rolled around.

I set my GPS for this site near Stillwater, PA in the Poconos. I drove up, having played a bar gig the night before; I always enjoy the ride out of the LV into the Poconos. It’s a fairly depressed area now that the economy has soured but I drove up and through the stone gates into this rather upscale area. 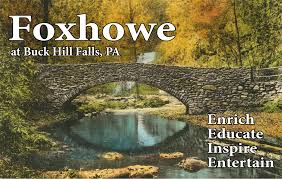 Mill (Millicent?) met me at the Bucks Hills Falls post office and she escorted me down to the pool area. It was an amazing spread of pools, changing rooms, bar, etc. and we found a nice place for the show on the grass. It was supposed to be a brutally hot day, but the 10 am start and some old trees made for a wonderful setting.

While I was setting up, I was able to chat with Mill, her husband and several other folks involved with my appearance. I was able to get a grip on this amazing site.

Bucks Hills Falls was originally a Quaker retreat for families from the Philly area back in 1901. Yes, lotsa money. So, there were some amazing summer homes that I drove past into the site. The recreation area had tennis courts, swimming pool and lawn bowling greens (!!!) But, the Quakers had the sense not to build anywhere near the Falls. And that was pretty cool.

It was a slow beginning with a grandmom, grandpa and young boy setting up. The kid was not impressed as he pulled up a pool chair. As folks started rolling in, I went into my good stuff, opened the bag, passed around noses, and did my best to entertain the kids, parents and grandparents on the lawn near the pool. As the nearby pool and hot weather beckoned, I wrapped up my set. The aforementioned youngster was up with me dancing at the end of the set. I made a point to thank his grandmom; we had made the connection. (His grand pop came up afterwards and is interested in getting me some gigs in his social circles….) Still, it was a focal point for me.

The group presenting me and Craig was Bucks Hill Foxhowe, esta. 1924. Check out this mission statement: “Moved by the belief that the large community gathered each summer at BHF offers a fertile field in which to stimulate thought, this Association declares its object to be: present and discuss the viewpoint of the Society of Friends, some of the problems arising from human relationships, in an atmosphere  of relaxation, cheerfulness and good will.” Well said.

Mill arranged for us to visit the Falls after my set, so we drove down to a restrictive parking site near the falls. (Finally, some street cred….) We walked through to the pass and this phenomenal vista opened up, similar to some Hudson Valley paintings I have seen and savored over the years. Mill took me up to the second tier of the falls, told me stories of her time swimming in the pools, other winter scenes in this magical place, and the stark wonder of it all. Yes, there was an incredible cool breeze going through on an incredibly hot day. Magic in this glen.

Mill had once applied for the Dean of Arts and Science at Lehigh. We had some rather interesting conversation about our Lehigh relationships. All in all, it was a pleasure to spend some time with this intelligent woman who welcomed me into this amazing world.

I headed back to Bethlehem filled with peace.

Now, to play this afternoon at Hackett Winery in the summer hear.