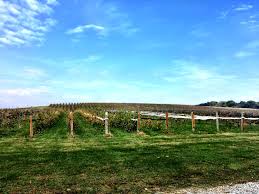 I headed out to New Tripoli for my monthly gig at Hackett Winery. I was pretty skeptical that the gig was on, with the forecast for upper 90’s and the heat index in the 100’s. I actually emailed Bob, the proprietor of the winery, that if he wanted to cancel, I would agree to that. He replied in the afternoon that it was on.

When I got there around 4:30, surprisingly there were lots of cars on the grounds. There was a birthday party going on, with some pop-ups, food and a lot of 40-somethings socializing. That was my cue to set up and play for three hours. Mercifully, the shadows were starting to cover the stage area so I was out of the sun. There were a few other folks at tables, and my friend Carl Z., neighbor and old college chum stopped over. He was trying to round up some of his friends for later on.

I gamely tried to play tunes that would appeal to this scattered audience and, after an hour struggling with dead strings, I took a break. I took 15 minutes to change my strings, drink water, talk to Carl and reset for the rest of the evening. Folks came and went but the birthday party people kept coming out of the ‘shack’ with a bottle here and a bottle there. They were there for the duration. I got no recognition from them and was surprised that I got no tips the whole evening. Free music!!! I gave the birthday boy my CD.

I played well and was grateful that I had new strings for the last hour. But, I was beat after a three set gig the night before and the Pocono gig in the morning.

I limped to the finish line and pulled out I Heard It Through the Grapevine, and it struck me that this was the most appropriate song of the day. I chuckled to myself and commented to Carl’s group of friends that sometimes I even surprise myself.

Long day ahead on Sunday with Saucon Valley Farmers’ Market in the morning and a hike to CT for Ron’s pickin’ party. The Summer Tour rolls on.