I would not have missed this one and was, as expected, worth the seven hours on the road. I figured the traffic would be smooth on the way up in the early afternoon. I had checked with Ron and Susie if I could stay the night, but later figured I’d rather deal with Sunday night traffic than Monday morning hassles. I was right.

Ron set up a stage and Bill brought his PA, so things were rolling already when I pulled in after 3 pm. The side yard has some big trees, lots of shade, a pool down the hill and a smorgasbord of food. There was also a slight breeze so things were very comfortable, bordering on the idyllic.

I got out my two folding chairs and sat down to catch Steve Rodgers set as the PA faded in and out. Seems the temperature was playing with the power. No surprise there. Ron had hoped that there would be some off stage jamming but it seemed that folks came to play their two or three songs, enjoy the other musicians and hang out for a while. That’s okay. Rick Johnson, Patch, Bill Morrell, Frank Pergola, Lou Audette, Chuck Koreiwo and their assorted soul mates.

My set was  pretty far down the list, but I was tickled to take the time to visit with some old friends, catch up with them and hear and meet some new folks as well. I love the surprises. 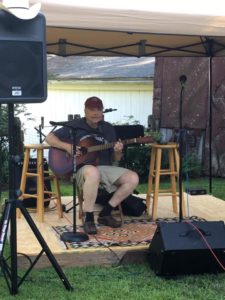 Eventually, Bill called out that I was up next so I hauled my folding chair (my trusty throne these days) up on stage, plugged in and launched into July, the perfect song for this moment. I screwed it up after mentioning “listening to Ron Anthony tunes” in the first verse, but only I knew it. I did We Are Welcomed next, a simple but effective folk tune which really sounds good on this Martin. I pulled out Giant next, and while I was playing, I had noticed a fellow who had a strange bowed and stringed hurdy gurdy type of instrument (apparently of Swedish descent) and invited him up to play on the open section of the song. He came up and hopped right on board, played a wonderful lead that expanded nicely. What a pleasant surprise but not totally unexpected at a close gathering of like-minded souls. I think folks really appreciated my spontaneity to embrace the moment.

Bill gracefully offered me another song and I took time to comment that a summer gig in Ron and Susie’s backyard is recognized as one of the plum CT gigs, and certainly I was honored to check off  this notch on my bucket list.

I finished with Lessons from Pete, and it was sweet to have my friends listening to it. During the song, I decided to ask my new strange instrument player to join me in the ending jam. Again, he came up right away and we had a delightful excursion on that. It was a pleasure to play for old friends as well as some new faces, too. I played well and my guitar rocked.

I hung out a little bit more, caught up with the folks I needed to check in with, finally hit the food tables and decompress for the ride home. I thanked my very good friends Susie and Ron for their hospitality and love, hit the road home about 6:30, filled with some good memories of the day.

Surprisingly, the traffic was smooth going home and I got to listen to a pile of CDs that I get for potential airplay, as well as my friend Joey’s new Electric Farm album. I lost track of the time listening to his work (while being a good driver), and it was the perfect aperitif for a full day of music and friendship. I tossed most of the other CDs back into the pile and enjoyed random cuts from some of the more mature artists. 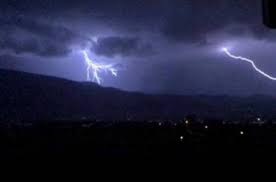 As I hit western NJ, there was an approaching storm in front of me, with lightening and great cloud formations. It was an auspicious welcome home for me and completed a magical Sunday.