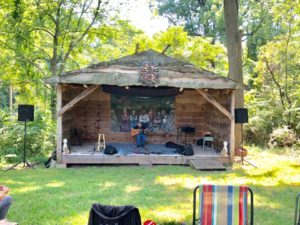 It was my annual summer trip to Father Folk, a folk music Brigadoon south of Reading, down a dirt road and past a corn field and into a sheltered glade with a stage, sound system and a bunch of folk music lovers. It’s a relatively secret gathering (no social media, please) of aficionados who take the last week of July to camp out and listen to each other’s music, with occasional drifters like me, on stage and among each other. The performers get paid with a T-shirt.

I’ve been going consistently each year for the last ten odd summers and love the attitude and enjoy this listening audience and they appreciate my music. There were some nice wrinkles in the festivities this year. I was preceded by the Lancaster Chinese Dance Troupe who did wonderful dances with spectacular costuming, elegant movements on the grass in front of the stage. I was humbled to go on after them around 4:30. I commented that this was a tough act to follow, not unlike having to follow the Phillie Phanatic once at a small festival. 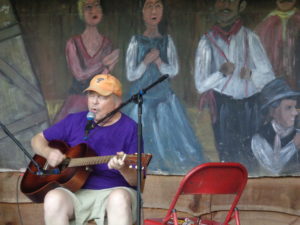 It seems my Martin is having electronic problems so, after the first song, I went with just the mike (not a good thing with some important gigs coming up). I played a really strong set, thanks to the setting and the great audience. Don’t Call Me Early, We Are Welcomed, July, Giant, Lessons from Pete. Shane, the sound and stage manager, asked me to play some more, so I added Giants, I Can See Clearly Now and Nadine to finish up. Both July and Lessons from Pete were particularly well received since they both encapsulated the scene right in front of us all, in the moment.

It was a great primer for Philly Folk Fest coming up in a few weeks, and it was good to chat with some of the familiar faces I have come to know over these many years. I look forward to next year.