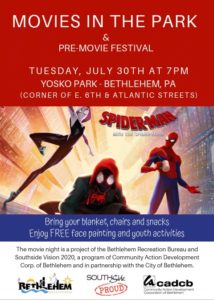 I pick up a few community gigs like this from the Community Action Committee of the Lehigh Valley, an organization that promotes health and community awareness in various neighborhoods in Bethlehem. Tonight was a film night – a Spider-man flick – with a giant inflatable screen erected on the basketball courts. I was part of the pre-show festivities, so I set up my chair and bag of instruments under a tree and started playing. It was hot. 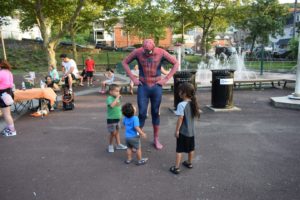 Bit by bit, kids and parents came over, picked up an instrument or puppet and we interacted. For the next hour and a half, I mixed it up with folks and we had a good time. Spider-man came over and played tambourine as well. He was actually Cesar Cordova, the ombudsman at Marvine ES, a genuine super hero in my book who serves this community well.

It was a small gig, but part of what I do in this microcosm of my home town.