I was glad to help out my friends Ann Michael and David Sloan by playing and supplying sound for the Annual Saucon Creek Arts Festival again. It is quite an effort of love by my friends and the festival supporters and we were blessed with a rainless Saturday, no small miracle these days. 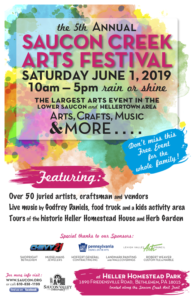 I was charged to set up the sound for my friend John Hufford, and as we chatted, I wasn’t getting any sound from the speakers, though there was some lights going on with the amp. It was working on Tuesday for my Calypso gig, so I was puzzled. I was lucky I had my small vocal/guitar amp in the car so I pulled that out and we got started, at least on a smaller scale. I hustled back to Godfrey’s to see if I had an old head in the basement, found a large monitor amp and dragged it back to the ole homestead site in Hellertown. As it turns out, the speaker on that was busted.

My set was at 12:30 for an hour and a half, and folks drifted over. Initially, I was doing my adult stuff but, as more grandparents, parents and kids settled in, I dug into the family repertoire. There was some really good interaction with the kids and the adults who stuck around enjoyed the energy. We did an exhaustive Down By the Bay, and as I tried to wrap the song up, one girl kept coming up with new animals. I said to her grandparents (in jest) that I would do some more if they bought a CD. They said sure, and I said that this was the first time I had shook down an audience for CD sales. It worked. It was a good session.

I hung around to help the other performers with sound, sat in on guitar with the old-timey couple, but it made for a really long day, especially with the failed sound system I needed to replace for Monday’s Rock Roots. It was a nine to five day for me and I was beat when I headed home.