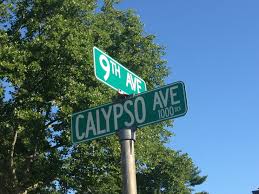 I’ve been lucky to have a annual spring assembly at this local Bethlehem school. It pays well, but it gives me an opportunity to use our familiarity to try out new material and performance techniques on the fly. There are favorites that I have to play, but I get to develop new wrinkles in delivering  them.

I decided to do the new Cat Came Back lyrics from the recent Tracy ES residency but also had one side of the group sing the chorus to the other, standing up while working on their ‘stage’ delivery. Once one side did it (with a standing ovation from the other), we reversed the roles. And then, of course, I had the teachers stand and deliver their chorus. I enjoy the shocked look on some of the newer teachers’ faces, but that’s the whole point. The faculty is used to my challenges and I appreciate their cooperation.

I then played Down By the Bay and Tracy’s new words. I used that a springboard to use the two sides again. I put down the guitar and stepped in the middle aisle and got an interesting animal from one side, asked the other side to find a rhyme and then asked one group of teachers to come up with an action word in the middle. It worked really well and bound the whole audience together. I then reversed the process. There were only two verses but it really broke down the performer/audience divide, a good theatrical device. “Did you ever see a crane bungee-jumping, that’s insane!” 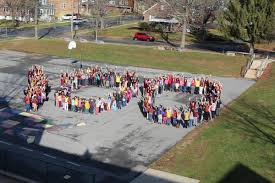 From Calypso’s Centennial Birthday in 2017.

I dug out the song we wrote in November of 2016 (finished the day after the election!) called Hey, Ho, Calypso! It was written for the 100th birthday of the school and tried to connect the commonality of kids going to school: school bells, lunch, playground games, classes and going home after school. I had to leaf back through this journal to find the words (thank you, Dave!). I taught the audience the clapping riff and the chorus, and, while going through it, I noticed several of the 5th graders joining in. I immediately asked them up. So, we got to play the song with these two boys and two girls leading their fellow students in the song. Towards the end, I dropped out my vocal and guitar and we heard just the kids and teachers sing it a Capella. It was some powerful juju, indeed.

A live version of the song was recorded in spring of 2017 and the spirit of the song holds up well. (https://youtu.be/_eGd87w_fEE) I was greeted by the big banner from then above me as I walked in the front door.

It was hot in the gym, and I had decided to do the show standing up, something that takes a toll on me in my old-age, so I was a soaking mess. But, as I drove to a close, I needed to get the kids up and dancing so I started with You Keep A’Knockin’ which morphed into getting the kids to Floss, Orange Justice and other current dances. I then asked if anyone could invent The Calypso and several kids came and did some great interpretive dances. As I wrapped up the show, several teachers said, “Where’s Baby Shark?” So I corralled everybody back in and away we went. Now that there’s a viral video, there is an undercurrent of kids trying to correct what I’m doing, but I forged ahead with my version.

All in all, it was an exhausting but wonderful opportunity to explore some creativity on the part of this community and myself as an artist.