My last set of the day was inside Ag Hall for a solo set on the smaller of the two stages. The gospel act before me, on the opposite side of the hall, went overtime (no surprise to me) but I was set up and ready to go around 4:20 for my half hour gig. I was looking forward to playing my adult material and wanted to showcase my Troubadour songs. It was a very sparse audience with a few of the drum circle women arriving early for their later set. Up front and in the middle was John Moser, entertainment critic for the Morning Call, notepad at the ready. Well, so much for taking it easy on this one. 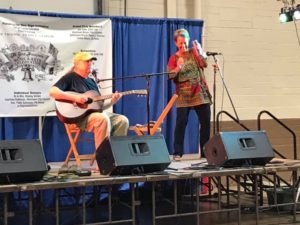 I was certainly warmed up by now and launched into We Are Welcomed, followed by Rosie is a Friend of Mine. With only a half hour, I did Lessons from Pete and Giant early on. I finished with Giants with my friend Pat Neff on thunder tube. I cut the set short so that I wouldn’t impinge upon the next act on the other stage, but those few who remained asked for Peanut Butter. Against my better judgement, I did a hasty version of it.

I noticed that my voice was a little crumbly and my left hand cramped up towards the end. Both a sign of a long and hot day on the job. It was great to play through a great sound system for this one; my Martin sounded great and I played well in spite of the sparse situation. I was glad to head home with a couple of checks in my wallet and glad to have the opportunity to bang on my guitar all day.