This annual backyard musical event is one of my favorite local efforts at celebrating our local folk music scene, with all the elements of an informal jam, some stage time for old-time and bluegrass bands and food. Did I mention food? Cliff Cole’s a long-time friend and hammered dulcimer player extraordinaire who puts up a tent, provides a PA and sends out invitations to a pretty wide assortment of players and folk music aficionados.

We were blessed with great weather and folks traveled from miles around to attend. It’s rare these days for me to spend an afternoon under the trees, listening and playing music among friends, so I try to make room on my calendar every year. This year, Cliff asked me to be the featured performer, and I consider it an honor.

I like the open jam that opens the festivities; I get to noodle on the songs and tunes that folks offer up – a be a fly on the wall. Later in the afternoon, Cliff opens up the mikes and various groups, husband/wife duos and soloists get to do short, three or four song sets, so the music moves along nicely, and, importantly, everyone gets to shine. It was nice to see my friend Rolly Brown do two sweet tunes. 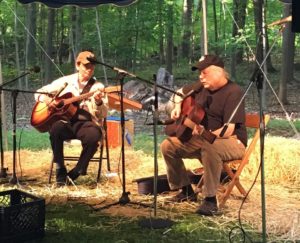 As the session settled into the early evening, I stepped up to do my solo set. Cliff had asked if I could invite Rolly up for a couple of tunes, and, upon scant reflection, I asked Rolly to just come up for the whole set. Why not? I’m sure Rolly would rather play than sit, as I would, and Rolly said sure.

As we started, I mentioned that this pickin’ picnic is what folk music is all about; folks getting together share music in a social situation.

We had a great time. Rolly’s great at listening first and letting me set up the song and that’s what I do well. We Are Welcomed, Barrelhouse, Giants and Giant, Don’t Call Me Early, Lessons from Pete and we did an encore with Nadine. Rolly jumped in with some great leads on a very diverse set of tunes and he enjoyed the set as much as I did. The mutual respect was palpable to each of us and to the folks listening. Magic happens. I came away high on the occasion.

It was a full afternoon of tunes among friends. Thanks to Cliff Cole and to my friend Rolly Brown for making it special.