It was a virtual Dave’s Night Out tonight with Dakota Dave, Dave Fry and two Dave’s in the audience. Epic.

I weaseled my way onto the bill for Friday’s show with Dakota Dave Hull. Dave is a long-time friend, having booked him with Sean Blackburn in 1982. That duo was one of the best acoustic duos on the folk circuit at the time with great vocals, hot leads and wonderful swing tunes. Dave had become one of the premier ragtime guitarists on the planet and it’s been over 12 years since he’s been at Godfrey’s, though he did a house concert at Space Mountain a couple of years back.

The April season means smaller audiences at the club. Tonight, we had seven. 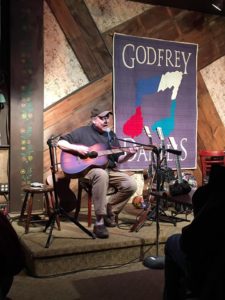 I worked up a 45 minute opener with some newer tunes, ones that needed some exposure in front of people. I had a good runthrough in my kitchen this morning but, as I always discover, playing on stage always creates some chaos in my brain. I had success with Part of the Union, Giants, Bojangles but blew some lyrics on Ten Men and couple others. Still not up to snuff. I haven’t had meaningful gigs to prepare for and tonight showed I still need some nose to the grindstone during off periods. It was especially tough with only seven people (and DDH!) in the audience.

I’m sure it was a good set, but it felt a little wobbly. 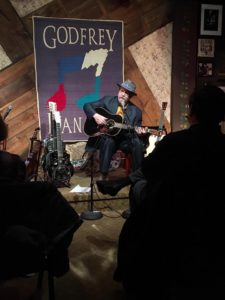 Dave did a great set (he started a little akimbo, himself) but his deft picking kicked in with superb rag tunes on four different guitars. He can pull off an entertaining evening without singing a note. That’s something special.

We agreed to finish off the night with two songs together. He suggested Victory Rag, one I could play mandolin on. The early rehearsal was rough but the finale was actually pretty good. I claimed myself the Ramen of Mandolins – I can noodle with the best of them. We did Green, Green, Rocky Road, a Van Ronk tune to end the night. That worked nicely. Dave ended with an encore rag piece.

In spite of a molecular crowd, it was a high-quality evening of folk music.