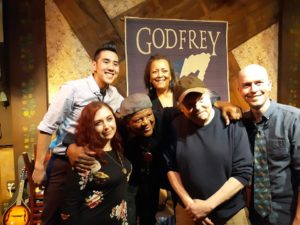 This was a long time coming, with Mike Duck putting together a nice slate of performers for the evening including Bev Conklin, Alyssa Allen, John Huie, Mike, myself and Bakithi Kumalo, the real deal. Bakithi is Paul Simon’s bass player but I’ve known him as Robbi Kumalo’s husband. Robbi is on my Playground CD and was a pleasure to get to know. She and her two daughters moved here from Long Island while Bakithi was on a two and a half month tour with Simon. He eventually moved to the

Lehigh Valley to be with his family. His history is quite amazing, from growing up in South African Apartheid to performing on the world’s biggest stages and then settling in our humble Lehigh Valley. He is a humble and genuine human being.

Bakithi is a true professional and I was excited to have the opportunity to play with him. It turned out great and there was a full house on hand, as well.

The group had a chance to rehearse some of the tunes ahead of the show and Bakithi was a real sport. Mike wanted to do Call Me Al. It was obvious that Bakithi didn’t want to do it and was really uncomfortable with our amateur rhythm on the song. I’m afraid Mike didn’t read the signs. When you play major stages like Bakithi does, you have to respect his experience. 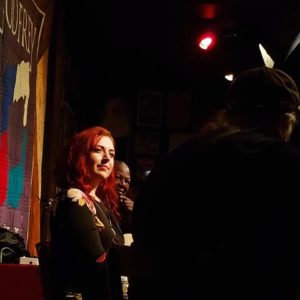 There’s was an appreciative crowd on hand as we did a round-robin among us. Bakithi did a great opening tune, having every one repeat a South African call and response and then encouraged everyone to do some full-throated singing behind his kalimba. He won the audience on the first song. Mike, Bev and John followed with their songs and it came around to me. I did We Are Welcomed in the spirit of the evening and Alyssa added some great harmonies and it came off wonderfully. Alyssa followed with an Anais Mitchell song that blew folks away. She was the real sleeper of the evening, later doing a kick-ass Respect that shattered everyone. Bev did Spooky and a great version of Motherless Child, like the pro she is. Mike played strong rhythm guitar and held down the emceeing for the evening. I got to do some noodling on mandolin as well and had some good moments. And I played cowbell! 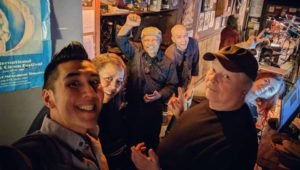 I started the second set with Bruce Cockburn’s What About the Bond, a new one for me, with a reggae feel. Bakithi picked up on it right away and we connected nicely on it, with Bakithi doing a bass lead in the middle. There were nice dynamics and I didn’t screw up the words, especially since they applied to theme of the evening. I think it was a surprising departure for the audience, expecting a folkier selection from me. When it came around  again, I served up I Can See Clearly Now and the audience was singing along from the get go. Nice to have a crowd like this.

We did a great version of Bob Marley’s One Love and it would have made the perfect finish. I had my fingers crossed. But Mike really wanted to do Call Me Al, and once he announced it, the crowd cheered and there was no turning back. We were able to do a reasonable version of it and the audience ate it up. I felt bad for Bakithi but he is a pro and played for the audience. I’m glad we didn’t do This Land is Your Land that Mike had in mind. It wasn’t necessary. Solid ending and a standing ovation.

Mike worked his tail off in promoting and producing the whole concert for months and months and I was proud that he pulled off a great show and got a full house for us. I was tickled to share the stage for the first time with Bev Conklin and Alyssa proved her chops in front of her Touchstone colleagues and a new Godfrey’s audience. I played well and enjoyed not not having to front the show for a change. 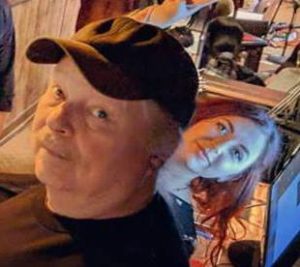 A good night at Godfrey’s.