I signed up to be tour manager for Erik Frandsen. Erik was one of the early NYC performers to play Godfrey’s in ’76, amazing us all with his deft guitar work, expansive repertoire and quick wit. It had been a long time since he’s played here and the Dave’s Night Out format was a good way to have him back. He is a very intense man.

Since he’s a NYC boy (without a car….), I said I would pick him up and take him back. He took me for my word and that made for a long day. I headed out at 12:30 to pick him up around 2:30 so we could beat the afternoon traffic back to the Valley. My GPS took me into the Bronx by mistake but I figured it out and made it to The Village by 2:45. Not too bad. 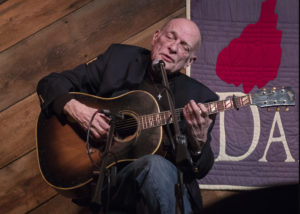 We had a good ride back as I asked him about living in the City, acting for a living, playing small gigs in cafes, etc. Erik took me across the street for a meal. He had a burger, onion rings, a beer and a double Jameson. We headed back for a quick sound check and the 7 pm show.

It was nice to see some old fans in the house, including Dick Boak, Rolly Brown, Anne Mintz and others who knew Erik from way back when. I told Erik that I would kick it off and then let him play two songs to my one. Rolly came up and did a song as well. Erik’s still a great performer, incredible guitarist and superb songwriter. After one of his fine jazzy tunes, I remarked that his songs are cinematic, essentially a movie boiled down to 4 minutes. Erik commands the stage (and the conversation) and I remarked to Rolly that I was lucky to finish the evening unscathed.  He can be acerbic to a fault, but tonight was a friendly one. Driving back, he mentioned several times what a great gig it was for him. I didn’t make any money, paid for gas and tolls but no matter. It was all worth it.  I serve the master gladly. 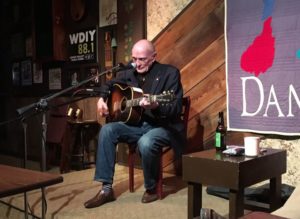 I had to hustle him into the car for the ride back to the Village (thankfully, it’s a fairly straight shot in and out of the Holland Tunnel) and it was smooth sailing. I dropped him off on Bleeker Street and I made it back a little after midnight. I was exhausted.