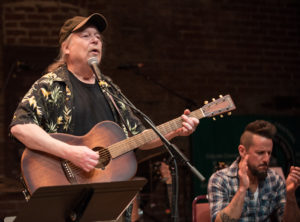 I came out to fairly big crowd and warm applause. I wanted to start small and expand throughout the evening, so Kevin and I did We are Welcomed, Sally Roger’s simple but powerful tune, with Kevin sitting up with me on hands and thighs percussion. It was a great to finish out the album and a wonderful way to start the show. 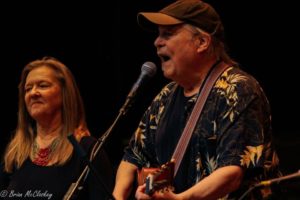 I brought out Wendi to join me with Sixty Minute Man. It was fun, but not terribly tight (we hadn’t done it since we played at Godfrey’s in the fall. Kris snuck up on stage and we followed with Kent’s Giants. I scanned the crowd for thunder-tube players and landed on my good friends Bill George and Doug Roysdon, a good choice, since they are stage veterans. They know how to “play” on stage, and they nailed it. I was glad to make them part of the show. 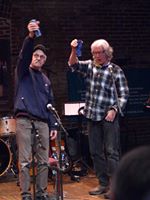 I followed with Baby Smokers (I still can’t gauge what the audience’s reaction is to this song but it was important to get it played). I did it well but missed Ansel’s harmonica part. I followed with Mr. Bojangles, a recent addition to my recent sets. I think I finally have it down and the audience sang along at the end. (I really didn’t have a sense of the audience’s sound in this space, so I assumed it went well.) 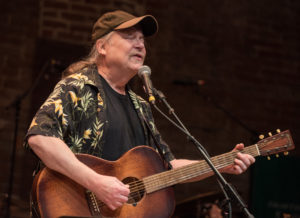 All in all, the acoustic set put things in motion organically, and away we went.