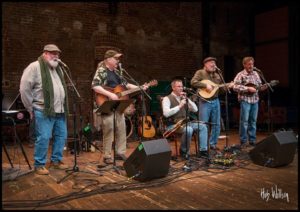 I wanted to take my first departure from the solo set to introduce my friends in Piper’s Request – Terry, Fred and Rick – to the audience. Also up on stage was my good friend Tom Druckenmiller on vocals. I had asked the four of them to record the CD vocals on a couple of tunes, along with Mike Beaky who was in the studio for banjo. There are several tunes on the CD that harken to this part of my repertoire: Don’t Call Me Early (opens up the CD), The Crawl and Giant. 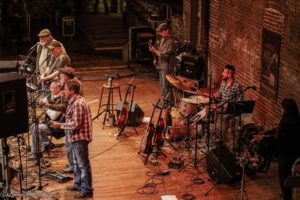 Don’t Call Me is a great opener and the lads know it well from several jams at Godfrey’s. This was the first time for  them to be playing with Kevin on drums and Kris on bass, so it was a kick in the ass for them. It did kick some ass with the audience, as well.

We followed with The Crawl, another tune that has been in my repertoire with several bands, including Pavlov’ Dawgs, a bluegrass band Kris and I were in last century. AGain, it is built to be a British Isles folk-rocker (shades of Fairport Convention, an early influence) and it was delivered nicely. I still couldn’t hear if the audience was singing, but I have faith they were. The Drunken Lads proved great vocal support. 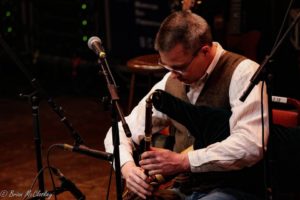 I asked them to do an instrumental medley, giving them the spotlight and giving me some time off stage. Their set of tunes was really fine and sounded great in this venue with this sound stage. The audience ate it up. They turned out to be a great addition to the show.

I came back on, along with Moe and Nyke, for Stan Rogers’ Giant for the final tune of this set. We had talked about the arrangement hours before the show, and it was one that I had on my mind for years. We did a great version of it on the CD, but now was the time to stretch it out. 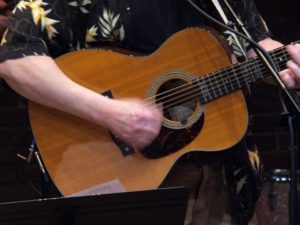 I brought my GD Martin out for the first time in years, in the strange D tuning I use for this particular song. It was kinda cool to have two guitars on stage, just like the big boys. When the sound guys turned it on, it literally roared. I said, “Ohhh, I like that!” 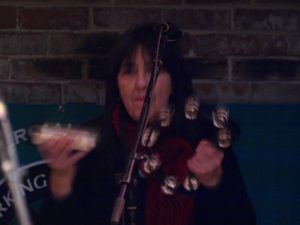 I’ve been able to play this one quite strongly, so I was able to kick it from the get-go. Nyke did a great improve for a couple of sections, the lads (pipes, mandolin and octave mandolin) and Moe (bodhran) set the rich tone. We then set up the final improvisation against a simple chord pattern, Terry added tin whistle, Nyke violin and, as the band did a slow fade, the spotlight fell on Moe’s lone drum. Bang! The improv section could have been more deliberate (a new experience for the lads and the second time we tried it) but the effect was pretty much what I wanted. Damn.

I thanked the boys and they exited stage right to well-deserved applause.