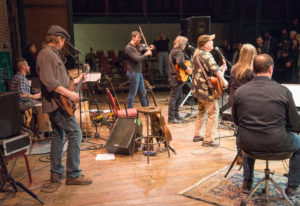 Having navigated the several chapters of the show, we headed into the home stretch with Lessons from Pete. We had charted the leads (Craig on the first) and the rondo towards the end (Nyke, Craig, Kris, Dan), so I was fairly confident that we knew what we were doing. It turned out great and I was strong on the verses, folks knew their spaces and every one stepped up nicely. I thanked people and we headed off stage to a standing ovation. 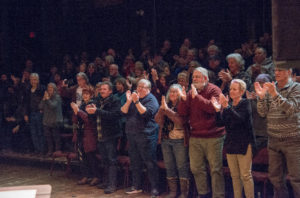 I never can quite drink in this experience; I’m always uncomfortable, feeling not quite deserving of the adulation. But, the quickest way to subdue these emotions is to play another song, so I quickly stepped out to do my encore.

I had given thought to this, and wanted to bring it back to a solo piece. Interestingly enough, I rediscovered the Rodney Crowell song Song for the Life a week ahead of the show. (I had given thought to Here Comes the Sun or I Can See Clearly Now, but settled on this one) My instincts were spot on. I had learned this one thirty years ago but had the opportunity to solidify it over the last week in my kitchen, at a GD open mike and for my Gorka opening set. It came off really well, though I didn’t quite nail the words, mixing in a line from the chorus in the first verse. I’m the only one who knows.

Wendi said later that she came back on stage with tears in her eyes. That’s all I need to know. 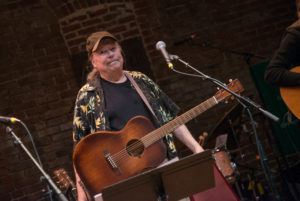 We gathered again to play I Like Peanut Butter, a salute to one of my signature kids’ pieces, easy enough for the band to follow and do leads. It was a good way to get people up and off their seats, do a little shaking and dancing, and restore some lightness to the end of the show. It was simply great to see all the musicians feeding off the good vibes of the song, each other and the evening, in general.