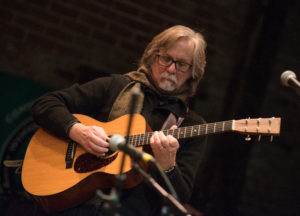 I was quite honored to have my friend, Craig Thatcher on stage with me for this concert. First of all, it was amazing that he had the date open. He also is part of the authority and confidence that is displayed on the Troubadour CD and, as I listen to it, I’m am still transported by his leads (on four guitars  laid down in two hours in the studio). It was important to feature him in this set. I’m no fool. 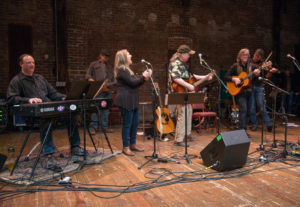 We started of with Mama Wants to Barrelhouse, a Bruce Cockburn blues that I’ve played for years (on Pearls CD), and one that is hardly a three-chord wonder. Great changes and curious poetry. I can lay down a strong beginning and set up the song well on guitar. The band found the groove immediately and we laid into it with gusto. Craig and Dan did leads and we all had our ears and brains on fire listening to each of them. Wendi did some fine vocals, Kevin and Kris put down the groove. We aint’ a country band now! 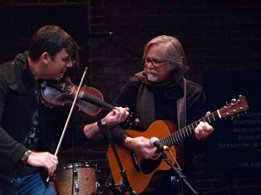 I had promised Craig and Nyke a two-song set. That was a no-brainer. They lit up the house as they so often do – just acoustic guitar and violin. They know each other musically as do few others in the Lehigh Valley. They finished with a Celtic tune that was phenomenal. As I came back on, I said that they had used up all the notes. Actually I was grateful to have a break, check in with the backstage band and reboot for the big finish.

The last song in this set was False from True, a Pete Seeger tune I learned from Guy Davis. It’s one of the last tunes on the CD  that pairs Craig and Mike Dugan, as well as Wendi and Annie Patterson’s great vocals at the end. It was set up to feature a ‘conversation’ between the two electric guitars. 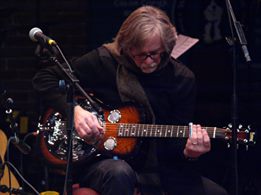 I really looked forward to re-creating the same effect tonight, this time passing the lead around with Craig, Nyke, Kris and Dan. Craig brought out his very nice dobro for this one and the effect was striking.  I called it The Rondo, though I’m not sure if technically that’s what it’s called. We went around three times and took our time bringing it home. The house was riveted, as was the band. Lots of respect for each other. A great landing and the audience loved it. This was one of the payoffs from some ideas I had two years ago. It worked on the CD and was even better on stage. 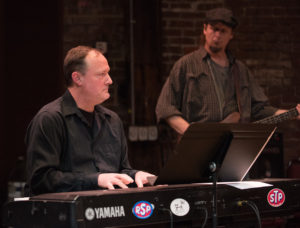 My friend Hub gave me a nice compliment this week about the night, “Great show, well paced and everyone got to show their stuff.” These are Hub’s photographs, by the way.

It was a pleasure to feature my friends.

Time for the Big Finish.