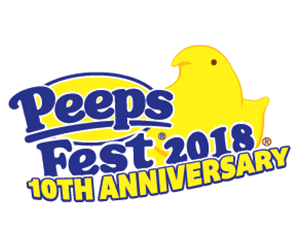 I am always thankful for work, as long as it doesn’t become work. It was borderline on Sunday. There is a big family festival at Arts Quest called Peeps Fest, sponsored by our local confectionary industrial complex – Just Born Candies. Held at the megaplex entertainment center here in town, it is two days of family-friendly fun and frivolity. I’m glad they have me play on one of the days, with multiple shows. I usually swap 45 minute sets with a magician and there is an extremely fluid crowd for the whole session.

Today, I was signed up for four sets starting at 10 am and ending around 5 pm so it’s was long day. I loaded in at 9:30 am, wandered a bit trying to find the site (thankfully not in the usual “mall” situation in the Commons) and headed up to the more acoustically fit performance space on the second floor. Arts Quest does a good job retaining qualified sound techs so things were ready to go when I got there and I settled in quickly and comfortably for my 10 am show. Praise the good sound man!

I always enjoy being the sacrificial opening act of the day. I get to play stuff I don’t always do in front of a ‘real’ audience. Besides I have the attention of the volunteers who are on hand, who are listening and waiting for the chaos to begin. You know, these folks have to listen to me for seven hours, too, so I enjoy engaging these good people. There were some chairs set up in advance and it seem to be a much better place to perform than in the past. So it begins. 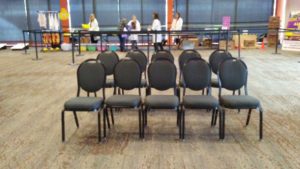 There was no one in the seats. So, the first set involved encouraging a young girl with her grandparents to sit and listen to my music. This is the hard sell. I did the hard work of breaking down her pre-teen inhibitions, work with the grandpa and grandmom and gradually involved her. It was the major task of the first set. They all did fine and I gave them Peanut Butter as a token of our time together. One down, three to go.

The magician was Eddie Ray from the Reading area. We had worked together several years ago and he was a welcome sight. Over the last couple of years, I had traded sets with a rather loud and abrasive magician (yes, aggressive patter is part of the schtick) but Eddie had a much more palliative approach. Still, the presentation nature of particular festival room is the yin/yang of music and magic, so Eddie packs the place for a bang-up show and then I regroup with my more subtle approach, engaging on a different level and  certainly at fewer decibels. 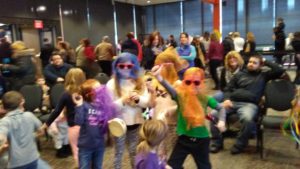 My next two sets were pretty frustrating with scattered families engaging with the various activity stations .around the room (and through the whole the building!). Here, it was really hard for the families and kids to maintain focus for more than two songs, and I worked hard to maintain connections with everyone. I plowed through. There were great moments throughout the sets and many magic moments were savored.

It was particularly weird that families and other folks appropriated the audience chairs in order to sit and rest a little while the kids were doing the rounds. I had to reclaim the space as an ordered performance space, and it affected what I would have wanted as a stage. But, chaos rules the day.

The last set was surprisingly the best, mostly because the throng had left and several fan families showed up. It provided me the energy to finish strong, able to acknowledge kids, parents on a personal level. That’s where I show up for work.  It was a good but tough gig. I do not do “Mr. ShowBiz” gigs very well (witness the magician/musician crowds) but I do the small stuff well.

There was no check waiting for me at the end. Damn.

The whole affair is a rather mind boggling commercial circus. Yes, I am very glad to be included every year, and get paid well for it. But, the cultural aspect is tough to distill. There is so much going on! And perhaps, that is what upsets me most (besides the $$ effect). Live Music was only one of six things going on in this room alone. I had become a consumable entertainment cog in this system, and I had to compete with other teaching arts: science, graphic arts, sports, and other viable educational concerns. Yes, a big creative space was a grand idea for this festival, but was a carnival situation. Strange, very strange, upon reflection.

I was particularly beat after this gig. Understood.