It was a pleasant surprise when an opening set for John Gorka plopped into my lap when Russ Rentler (Razzy Dazzy Spasm Band member w/ John at Moravian) declared himself a walking petri dish and had to cancel his set. This is a rare opportunity to share this stage with my friend (and his audience!)

John’s been in town for a couple days so I’ve had a chance to catch up with him. He is one of maybe four men I consider my brother. I’ve heard that I’m part of his show with his rap about PA scrapple, mentioned in the same sentence together. Thanks, John. 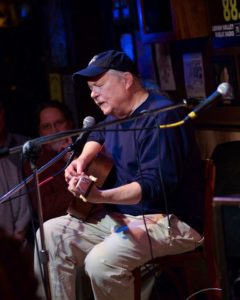 I prepared a short 4 song set, meaning to be brief on a Sunday night show. Kevin Soffera texted me before the show, asking to find some standing room to hear John. We decided to do the set as a duo. It turned out great!

Kevin set up his cajon gear and a bag of shakers, tambourines, etc. We came out to a completely full audience with lots of friends in the crowd.

We started out with We Are Welcomed, the final cut on the Troubadour CD, and one that is just a duo. It was the first time since we played it in his studio. It fit like a glove and a great simple tune to introduce us. It’s cool that the song has really solidified since we recorded it as a new song.

I chatted about scrapple, Catholic Schools Week with RockRoots, and some of my connections with John. We share the same sense of ironic humor (no surprise there) and it shapes our live shows beyond the music.

We dialed up Stan Rogers’ Giant, again a nice fit with John’ show. He has a very nice intro to Stan’s visits to Godfrey’s and he finishes his set with How Legends are Made. We pretty much smoked it, and Kevin’s percussion was tasty and my guitar roaring.

We did Lessons from Pete next and it turned out wonderfully as a duo and the build at the end worked nicely with just the guitar and his percussion. It was well received and gave us the opportunity to plug Saturday’s concert.

I decided to bring out Song for the Life, a Rodney Crowell tune that I’ve pulled out of my way-back set lists, and one I’ve been working on in my kitchen this week. I’ve put together a tight little arrangement is straight ahead. I play on using it for an opening encore song for the concert. (Boy, that’s arrogant, assuming an encore…). The guitar was slightly out of tune but I hope I’m the only one who notices.  It was a spot on finisher for my set.

troduced John and exited stage right. Done for the evening and now a chance to see my good friend in his element. He has become a consummate performer, with humorous and warm stage presence to match his rich voice and incredible songs.

I am blessed to be in his large circle of friends.