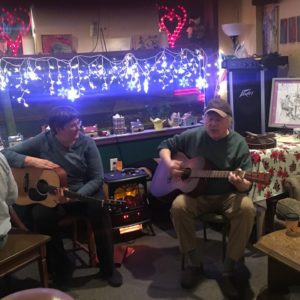 Mercifully, my two RockRoots assemblies were rescheduled at a later date, after two hours in traffic this morning. That left the Emmaus Jam on my schedule for the day. It’s an informal song swap I’ve be hosting along with Greg Buragino on the fourth Thursday on the month. It’s a relatively small group, and tonight is was just six of us, and that was just fine. We did some quiet songs, passed around the tunes and chatted. 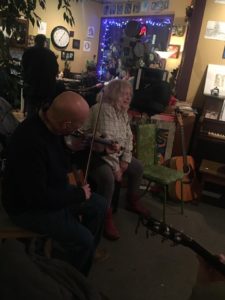 Greg plays fiddle and guitar, has a massive songbook (and is a fine piano player, too), Pete makes his own guitars and does a lot of ten chord swing standards, Nadine is a shy lady who loves to sing and has a fistful of interesting contemporary singer-songwriter material, Rich plays guitar and piano and has a fine set of ears. Robin hauls in her cajon.

I am the guru, I guess, so I have to figure what tunes that I can share, but often break out some material I’ve been working on. Thus, I brought out Song for the Life and Sixty Minute Man, tunes I will use next week at the Troubadour Concert.

It was funny that I always think about tunes to do as I drive over South Mountain to the gig before 7 pm. Today, I was listening to a CD of material I had ready for my radio show last Saturday and Chris Smither’s minor Maybelline came on. Sure enough, Greg pulled it out tonight. Serendipity!

I remarked how much I love these small gatherings, for the camaraderie and for the chance to noodle on mandolin as I get to play backup for a change. I also love listening to the chord progressions and trying to figure them out. Puzzle time. 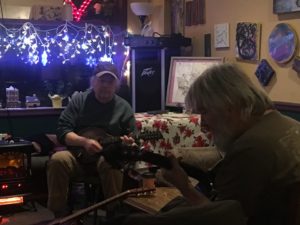 I get a pocketful of bills to buy me some groceries and laundry money.