It’s been a while since I’ve been able to showcase my solo show for Young Audiences and prospective PTA’s. I was glad to be part of this PA showcase and I was slated for the 9:30 opening set for the day. I get to do 15 minutes and then make way for the other YANJ acts.

I got there in time, inspite of brutal traffic around Norristown. As I set up, I was able to get some updated publicity photos for my spot in the new catalogue. Having been part of YANJ for many years, I have come to know many of the staff and appreciate all that they do to introduce and promote us to assembly buyers.

Today, there was only about ten ladies in the audience as I started out, but I had a good audience of first, second and third graders and their teachers. My people! I started out with I Like Peanut Butter and immediately broke a string. I could see a wince from Seth, the artist representative – he knew – but I plowed on, knowing that I can follow with some guitarless material. 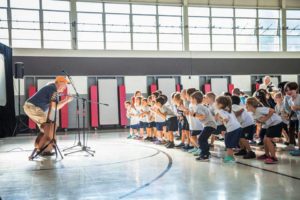 I followed with The Tutti Tah, getting the kids up and moving. It was a riot and created some great energy. I picked up my 5-string Martin and did The Cat Came Back, again making space for the kids voices to be featured. All in all, it was a crisp 15 minute set, the kids were charged, as were the teachers. 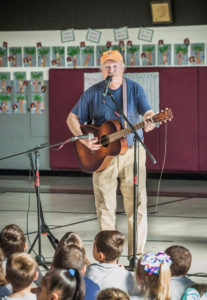 I brought along my CDs and made them available to the PTA moms and the school’s teachers, many of whom were delighted to get a copy.

I stuck around to see some of my fellow arts-ed performers, including a Native American storyteller, an African drum and dance group, a salsa and samba trio, an actor who did a piece on his being born with a deformed hand, and a hip hop dance troupe – all quite remarkable performers. I rarely get the chance to see the other acts on this roster, but have come to know them at various YANJ artist conferences. We are all doing some mighty work.

There used to be many PTA folks at these showcases but things have really changed since the recession of 2008.

And, who knows if this showcase translates into work for me.