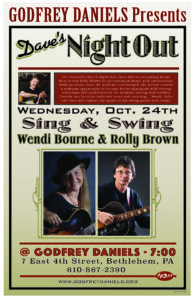 As always, these gatherings are wonderfully inspiring, informative and fun – and under-attended. Tonight’s topic was Sing and Swing so I invited two marvelous swingsters Rolly Brown and Wendi Bourne. Wendi has sung on all of my albums but she also is a great stride guitarist as well, working with Girls from Mars and other tight vocal groups. Rolly is a master guitarist and teacher and they’ve both played together for years.

I started out with The Barnyard Dance, one of several swing-ish tunes I do and then let Wendi and Rolly loose on their real swing tunes, Wendi laying down the rhythm chops, Rolly playing leads and then Wendi chiming in with some great scat singing. Along the way, we talked about some of the great influences that have shaped swing music in our repertoires, the various variations of blues, lounge, jazz, Texas Swing, and more. Django, Bob Wills, Joe Pass, Ella Fitzgerald, and more. We covered a lot of bases during the evening, chatted with the audience and played some fine music. I had the best seat in the house, between these two friends.

During the course of the evening, I pulled out Dan Hicks’ Crazy Cause He Is, one I hadn’t planned on but pulled off, spur of the moment. I did Cab Calloway’s Hey Now and Leon Redbone’s Walking Stick as well. They fit in nicely with Rolly and Wendi’s standards, though not up to the brilliance of their playing. But, it’s how the evening rolls.

I am barely in the same league with both Wendi and Rolly as far as swing expertise but that’s neither here or there when it comes to our friendships and mutual respect. I come away with a really good feeling with the high quality of the evening’s entertainment, and I know that Wendi and Rolly and the small audience did, too.