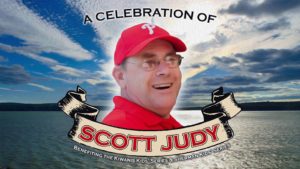 My friend Tom Carpenter asked if I would do a set at a life celebration of radio programmer and folk music promoter Scott Judy who passed away in the late summer. I had done a kids’ show for him last year at the annex of this larger theater – The Sherman – in downtown Stroudsburg. Today’s show was in the main theater itself.

I was the fourth of five regional acts: Em Mure, soloist, and a NJ folk-rock quintet from northern NJ, The Folkswagon. Tom did a short set and I followed with a 40 minute set. A regional blues band Carol Fredericks & the Dirty Jersey Band finished up. 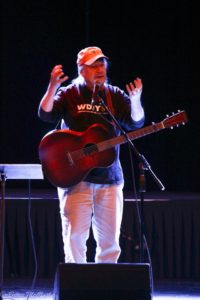 Though there were only a handful of folks in the audience, we performers were treated to a full sound and stage set up, so I really enjoyed doing a set in this atmosphere, one I rarely get to do these days. It recalled gigs at the Philly Folk Festival and Christmas gigs at Symphony Hall. These always are tremendous opportunities to work on this kind of stagecraft. 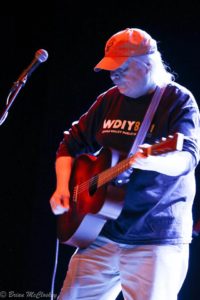 I worked out a set of my good stuff and was able to nail the material and not break a string. Having just done three and a half hours of music, in some brutal weather conditions, it was no small thing to make it through the set without popping one.  If I had, there would be no way to gracefully change a string and resume the set.

I was able to chat comfortably about my songs and what I do as a musician/performer, and though there were some folks in the audience who were very familiar with my material, I was able to engage and entertain the small audience. Again, my 000-15M sounded like a cannon. “It sounded THIS big…” said my friend Dave Eshbach.

At the end, folk thanked me, including members of Scott’s family, but I was physically whipped on the drive home. I took the scenic route through the Poconos which helped me digest this wonderful opportunity to play a big stage and do a professional job for a good cause.