I’ve made a point to make Kenny Siftar’s Labor Day Weekend party north of Bethlehem. He and his wife Lorrie put on a great bash on the Sunday and it’s a great gathering of musicians and friends with an overabundance of food and drink, a beautiful sound stage and a plethora of the local players. 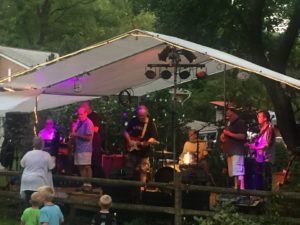 I got to hang out for a change, and though I don’t like crowds, I had some good conversations with various folks. One woman came up and thanked me for what I do, saying she brought up her kids in the 80’s with my music. I am no longer uncomfortable with these chats.

A couple of years ago, I asked Kenny if I could open up the afternoon with a solo set, since no one seemed to want to go first. It was a good way to say hello. Steve Kimock usually was in attendance, and it afforded me the chance to jam with this world renowned guitarist. Last year’s set was spectacular.

This year, Stevie was in California, so I did the opener solo. I had a great time, playing my 000-15 through the big sound system. I had worked out You Can’t Get Me, I’m Part of the Union that morning and, at least, got it off the ground. I played well and then got off the stage for Steve Brosky’s acoustic set.

Another familiar face came up and talked with me about my new album, and, as usual, he asked if the material was all original. I said no, but the album is particularly good. I could see he was not interested. Again, this is a difficult concept for some folks who appreciate good music but somehow insist on a songwriter’s touch. A really good song is better than a half-assed original, in my book.

The rest of the day had all the players getting a shot on stage with all kinds of blues, rock and roll jams. I’m proud of the players in the Lehigh Valley and glad to call them my friends.

Anyway, it was good to be included in the rather large circle of friends on a beautiful Sunday afternoon in my hometown.