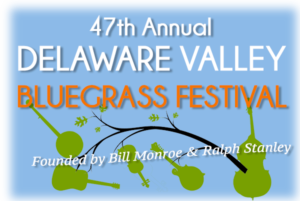 I am lucky to be a small part of some major festivals when I get called on to perform for the kids and families, mostly on an outlier stage. I get in free to see some great performers and I get a nice check, too.

I headed out to rural southern Jersey to the Delaware Valley Bluegrass Festival, now in its 47th year. It’s held in a county fair grounds so there’s a covered stage area, outbuildings, local food vendors, camping areas, etc. I was assigned to large open air pavilion used for various agricultural animal shows, but they had a small area set up with a sound system and an arc of bleachers. A nice presentation space though pretty dusty with flecks of hay floating around.

I was co-billed with a fine magician who started out the afternoon with a good crowd. After his set, there remained a decent size group for me to work with. I moved the stage monitor off to the side so there was little between me and the audience. I did my solid stuff early, got the kids into the instruments and up and dancing. It was a good move.

There were actually some kids who knew my music and had a couple of my CDs, unexpected after a two-hour drive. I had an hour wait until my next set so I took in some music from the main stage and some local ice cream ($3!).

The audience for the magician was smaller this time and he adjusted by doing some up close card magic. When he packed up and left, there was no one left but the sound man John. One of the organizers breezed through and thanked me for being there and said it was important for the festival to have my music for the next generation. That was nice.

Eventually, a small family came back for the second set so I abandoned the sound system and moved my gear up to the front of one of the bleachers. The dad, the young daughter and the mom with a year old son became my focus. I was able to get them all playing instruments, giving the spotlight to the girl on rainstick and clatterpillar, all while under the riveting gaze of the young boy. It remains a joy to capture the attention of these very young people. I was also glad I didn’t save my really strong stuff for this second set.

I stuck around to sample some more festival food, talk with the few friends who searched me out (I was announced from the main stage several times, but only Fred came by to say hello), and then headed back home. It was a good day, though.