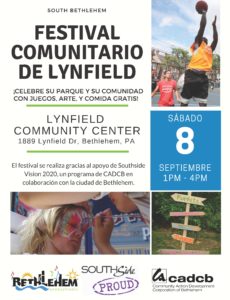 I’ve been fortunate to connect with the Community Action Council of the Lehigh Valley through my friend Doug Roysdon. They sponsor various community events in small neighborhoods on the SouthSide, usually in black and Latino areas, most often off the beaten track for me. This one was in the Lynfield projects on the hill that overlooks the bend around the Steel in to Hellertown. The small park seemed to be in the middle of the countryside.

Various community organizations like LV Heath Network, 4-H, the local farmer’s initiative and others. They had snow cones, fried plantains and empanadas, the HALA dance group and Al Grout, the juggler. Doug’s a puppeteer so we usually tuck ourselves somewhere and I engage the kids and families while Doug does some paper puppet-making. It’s a small time thing but usually the kids are friendly, cruising the park and engaging with folks.

It was the first cool day in a while, cloudy but no rain. My bag of instruments always reels the kids in, and I encourage the big brothers and sisters, moms and dads to join in, which they usually do.

Today, a woman asked for “Baby Shark”. I was surprised, but, as I found out, it has become a viral Youtube thing. So, I did my version, and immediately the woman said I was doing it wrong. That’s when I began to question what I was doing. Of course, I let her show me the other version but it fell apart. What goes around comes around.

Anyway, the time moves quickly and it was fun to mix it up with the folks in my hometown.

Off to my Hackett Winery gig at 5 pm, just as it began to spritz.