This is always one of my favorite gigs at Musikfest in that it gives me a toe-hold in doing my adult “serious” folk music and I get to play in a trio with bass, lead and my rhythm  guitar. Folk power trio! Ed McKendry and Kris Kehr are both tasteful and intelligent players and we communicate wonderfully on stage. I have complete confidence in their skills and only have to worry about my own. No minor thing.

We had an hour and half show at 2 pm and there was a very good house waiting for us. (The rockabilly band before us was great, but had just found out that their van was just impounded for illegal parking in a lot behind the stage. They were digging up cash to pay the company and were no longer in fine spirits.) Terry and Dave were on sound and we were plugged in, checked, comfortable and ready to go at 2 pm. Dina Hall brought us on and away we went. We started strong with Don’t Call Me Early, Nadine and Mr. Bojangles. I nailed the words and delivery and overcame some lyric hurdles that I had boned up on. Bojangles was one that was new to the set. Well, all right! Good to do them early on. 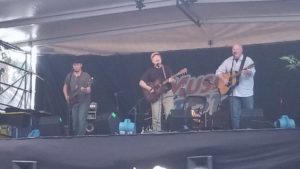 I had decided to stand for the whole set in order provide some more energy, and, though I was beat by the end, it felt good and I know it helped out the show. My new hips did fine but it was really, really hot. I also had a bastard fly landing on my left arm for most of the first hour and that was more of a distraction than remembering the words. It’s always something. (The other guys had no problem – I had showered before the gig, so…..)

I worked on Ten Men this week so I could land this song for the first time at today’s show. I got real close, and since it is a politically charged song, I felt some weakness in the delivery, and it was new for the lads so it could have been better. But, we pulled it off and it is now in the rotation. That’s why I like these big stage gigs; you get to see where you’ve come since last year and see if new material is really ready.

I gave Ed a couple of songs in the set and backed him up on mandolin. He did two of his originals, mercifully for me, some of the easier ones, I got the chance to step out of the limelight and the crowd loved the tunes. I love to play backup, too.

I then did a three kids’ songs. Since the recent Morning Call article had mentioned that I would be doing some,  I did inserted The Cat Came Back, I Wanna Be a Dog and Giants. All of them got the audience to vocally react and it turned out to be a great diversion from our ‘serious’ stuff. Kris’s daughter Lili and Noah (from yesterday’s show) came up to play Thunder Tubes. Lili is delightfully chaotic and sprinkled some of that in the set. Vaudeville lives. The kids’ set helped to shake the dynamics and set up our final run.

We did False From True as a slow blues to return to ‘normal’ and followed with a sprightly Rosie is a Friend of Mine, both nicely received. I did a solo Irish Ballad which I could see shocked a few folks unfamiliar with my sense of humor and followed that with Rodeo Rider. As the finish line closed in we jammed on Pay Bo Diddley and finished with a strong Lessons from Pete. I was feeling fatigued by the end and was glad to bring the show to a close.

There were a few standing O folks and some generous applause, but, at that point, I really don’t have a way to gauge that sort of stuff. I have to get my stuff off stage for the next act. I wish I could take the time to drink it in, but I have never been comfortable with any kind of praise. But I’ve learned to say thank you.

Both Ed and Kris felt good about the show. Kris said I played really strong (I do listen to that kind of praise) and we went about getting our gear together. I hope we’ll have time to break down the gig together. I thought we did really good, held the audience, mixed up the tempos, genres, did a few kids’ songs and some meaningful tunes as well.

Musikfest didn’t supply folks to sell CDs this year and it really cut into my product sales. They had said that we could keep our commission this year (a long time bone of contention) but also didn’t help us out with personnel. When I finally got packed up and headed to the merch table there were only two folks there. One gent bought Pearls and two Troubadours (the first complete DF adult set I’ve sold) and another man bought my first Troubadour download card, something new I’ve tried this time around. Still, I’m glad I’ve got new stuff to sell.

I had a nice chat with the download guy and he complimented my crisp vocals and diction. He also said that he had never heard The Cat Came Back!!? I told him that those vocal elements are setting my new CD apart and we agreed that a song rises or falls with the vocal delivery.  In hindsight, that’s where I’ve made the most progress over the last ten years and I owe that to playing for kids (always be clear) and from my vocal lessons years ago with Gloria Davis in Allentown. She was merciless in her demand for me to ‘perform’ the lyrics so that they convey meaning and emotion. She was right.

I was drenched in sweat, fatigued but I think The Trio did quite well today, worthy of a main stage set of aggressive folk music. I look forward to hearing from folks about how they thought it went and listening to the tape of the event.

I love playing in my hometown at a major festival. I wish I could do it more than once a year. Thanks, Ed and Kris!