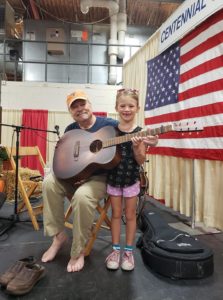 Today’s show was interesting, again, not a big crowd but people who seemed to come out to see me play. In front was Samantha and Scootaloo, a mom and young daughter who have been fans for many years. Scoot was delighted to see me, and came over before the set, beaming with a number of front teeth missing. Growing up….

I did some kids stuff up front and  headed towards some recent adult stuff. Scoot had an elephant puppet on, the only one in the crowd, when I wondered aloud that it would be cool to see everyone with a puppet on their hands. I remarked that I could double the audience. One lady sitting up front took to the challenge and started passing out puppets to men and women throughout the audience. Sure enough, everyone joined in on the situation. I did Baby Shark and then Splish Splash, with all of the puppets dancing, reacting with their neighbors. It was quite a remarkable sight for me, a reward for thinking outside the box. And the adults became kids before my eyes. 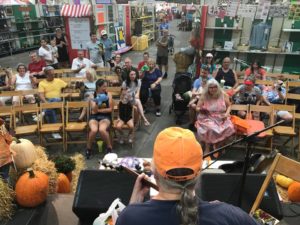 I asked the people to return the puppets to the front of the stage and then mentioned that I had absolutely no tips in my mandolin case. I then asked the puppets to bring up a dollar with them. They did. I mentioned I seemed to have stumbled on something here. Jeanine, my host, said at the end that it was a stroke of genius. That’s kind of overstating the case but it was pretty cool.

There is always something waiting to happen if you leave the door open for surprises.