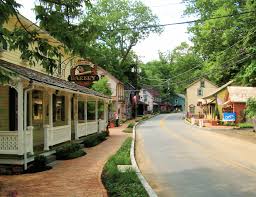 Things were hopping when I pulled up to the St. Peter’s Bakery tonight. I made it through some rainy Friday night traffic but arrived with 20 minutes til show time.  A breeze, in my book.

Surprisingly, there were several familiar faces and friends on hand (some even made reservations!), and there were nearby tables of families with kids, and folks lining up at the register. I got set up, tuned and plowed into Shoo That Fly. Kids were dancing, bouncing, hugging and having a good time. Then, those families packed up and left, instantly changing feel and the median age of the audience. (I gave the young families a Peanut Butter CD) Now I could get down with my adult stuff.

I played well tonight, thanks to my Martin. It makes me play cleanly, and it responds with clarity. I’m having a blast with this instrument. It turned out to be a loud, talkative crowd, but with lots of other folks listening, so I was glad I had my tools polished and ready. The small PA amp I’m using is turning out to be the small and good sounding system I need, a small footprint with nice fidelity. I needed it tonight. 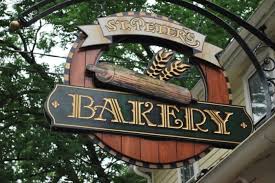 Another woman asked me up front if I would do John Gorka’s Good Noise from my Pearls album. I admitted that I didn’t remember it – this happens when a song is not in my immediate bag of tunes, but I promised to re-work it. She was right; it’s a good tune for our current times and I will get it up into rotation. Thanks, Barb.

My friend Bonnie Wren was there when I arrived. She is as good an audience as there is, and she made me concentrate on my vocals tonight. Louise is our favorite and I sang it for her. And harpist/pal Nick DePetros was there with his wife, listening to my first hour of stuff. 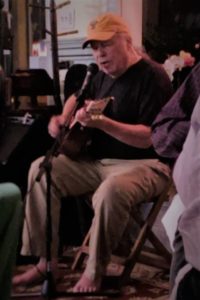 As the evening loosened up, I asked Nick if he had his harmonicas with him. (Dumb question, the bag was hanging on the brick wall next to him.) So I asked him to join in on a tune – from where he was sitting. I’ve done this before with some interesting effects on the room. We ended up passing things back and forth for the last 45 minutes. Even though there was loud chatter to my left, those that were listening tuned in to the interplay. Nick is a pro and it was quite wonderful to have him tonight. It made my job more enjoyable.

I have had separate occasions to use a remote instrumentalist, and the theatrical effect is dynamic. People are so used to music presented on stage, and when it bubbles up in their space, there is a noticeable shift in perspective. The audience noise usually drops its volume to adjust to the unamplified source, a dialogue is established between the actor on stage and the player in the audience. The overall effect is that this breaks the plane between the performer and the public. A rare and wonderful thing.

I gathered up my pizza (for tonight), bread (for the week) and sticky bun (for tomorrow morning), stashed my cash (a very good night for me) and headed back to Bethlehem listening to Bruce Cockburn. That’s a good night in Pennsylvania.