I lost a soul mate today, my pomeranian dog Sam, known as Sam The Dog. He entered my life while I was living in Connecticut with my wife Kim and our children Jaimie and Rosalie. Such a small dog but with perceptive eyes, a spunky spirit and a listening ear. We soon became blood relatives.

Some fond memories: After a bath, he became quite animated (perhaps exposed as a skinny rat hound) and proceeded to go off on a running jag throughout the house. He often flipped this switch and became an energizer bunny, spinning wheelies on the wooden floors in our house in CT and in my apartment later on in Bethlehem. It was an explosion of joy that really connected the two of us. He also loved to chew on a beat-up old toy, a happy dog.

He loved to take car rides. Whenever I said, “Let’s go for a ride” he knew exactly what I meant and ran for the door. Rosalie would also mention, “Let’s go see Daddy”, he would immediately react. I would ask for a kiss and he would give me a lick on the chin. (He particularly liked when I came home from the gym. Good licks there!)

Occasionally he would travel on some of my gigs and would often do a surprise visit to the stage. Good karma there!

Upon my divorce in 2010, I had to face the separation from my wife, the splintering of our family and the rift between my dog Sam and myself. There are so many pains in these life changes and I was surprised how much losing Sam’s affection would affect me. This bond was quite powerful. 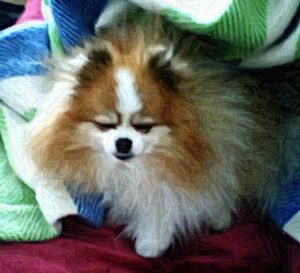 Yes, I had ‘visiting rights’ with Sam once Kim resettled in Bethlehem, but I found I didn’t have the ability to tend to Sam with my traveling schedule and my solitary lifestyle. Needless to say, I was also was quite uncomfortable with Kim and her relationship with a former friend and eventual husband.

I was upset that Gene referred to Sam as “that dog”, a feeble attempt at humor but also exposed his lack of empathy for Sam The Dog. It pissed me off and remains one of a multitude of flash points about our uneasy relationship.

Kim informed me of Sam’s current situation, saying that she was not sure that he would make it for much longer. I asked if I could arrange a visit with him. Last week, I dropped over to pick him up and take him for a ride like we used to do. Gene asked me in and I flatly refused. Kim brought him out, a mere bag of bones and I took him down to the Lehigh River Canal to where I do my meditations.

I held him in my arms, talked to him about our life together, our good times: we looked into each other’s eyes and told him it was okay to let go. I said my piece (peace). When we got back to Kim’s place, we three had a chance to sit on the porch and talk. As we talked, Sam perked right up, resumed his stance on my lap, and appeared quite happy to be alive. Kim and I had a chance to talk about her parents (still part of my family) and Sam’s personality. It was good. I said goodbye.

Yes, a dog is part of the family in so many ways. And when the family is split up, the repercussions flow outward like the waves from a pebble in the water. I have missed my companionship with Sam like the loss of a brother and it remains part of my inability to recover from my divorce. But life is not fair and I should learn from this and move on.

My last moments with Sam were deep. He recognized me, acknowledged our love for each other and lifted both of our spirits in our last time together. Isn’t that what a dog is supposed to do? May heaven allow dogs.