It was an honor to return to the Bethlehem Sculpture Garden along side the City Hall. A lot of love and attention has gone into making this a space as an oasis on the northside of town. I’ve done various concerts here over the last 14 years and haven’t played here for 4 years. Luckily, my friend Dick Boak was asked to put together a show with Craig Thatcher and Nyke Van Wyk and myself. I jumped at the chance. 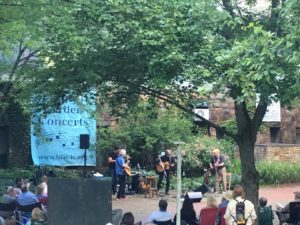 Craig put together a set list, provided a rather extensive sound system and was the center of the project. And folks come out to see him. That’s quite an amazing thing for the Lehigh Valley.

Dick started out on his wonderful autoharp with an original song (with a quick wink about Godfrey’s… not unnoticed.) He brought the folks into focus. Craig backed him up on another one and then Craig and Nyke did some fine instrumentals. Craig invited me up for my small set.

I began with Giants and invited the only young lad in the audience (trying to bring the average age of the band down…) up to play Thunder Tube. He brought his granddad up, too. He whispered to me that he knew this tune. So we did the song and it brought a different kind of focus to the show.

I followed with Rosie is a Friend of Mine and both Craig and Nyke sat in. Craig had played on the recording and it was new for Nyke. No problem because they both have innate performance sensibilities. It was nice, and a surprise for parts of the audience who have not heard my newer stuff.

After a short break, Craig and Nyke did Urge For Going, a tune I heard Tom Rush do a long time ago and one I played back then. Dick came up for some of his tunes while roamed the area to take in the scene. It’s actually nice to be ‘out there’ for parts of the show. 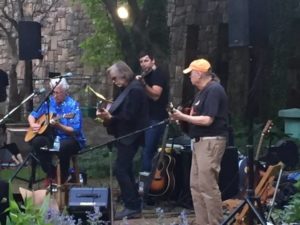 When called to come up again, I asked Nyke to sit in for Giant, the Stan Roger’s tune. Again, it was a nice break in the guitar intensive show and Nyke and I took the audience up into Canada. I followed with Lessons from Pete, again, Craig shines on the recording, but Nyke sat in for the first time. Delicious. It really landed. The audience was taken by surprise and I felt that I had made my mark.

I sat in on mandolin for some other tunes with Dick, Craig and Nyke and it felt comfortable to be a side mandolist. We rapped up the evening with some blues. I wrapped up chords to help the pack up but eventually headed back to the car with my friend David Sloan.

All in all, it was a great stage with some wonderful friends in my hometown. I wish I could have helped shape the evening some more, but enjoyed being part of the festivities.