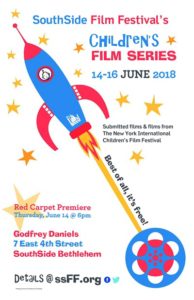 I was asked to do a set for the red carpet opener of the Children’s section of the SouthSide Film Festival. The Festival shows sets of animations and films over Thursday, Friday and Saturday days but they do a ‘Gala’ opening on Thursday night. It seem natural that I should do this.

There were only a few families tonight at 6pm, with the show at 6:30, but I launched in with one family of grandad, dad, son and daughter. The girl wanted no part of participating and refused to grab an instrument to play. Boy, that put her on my radar. I worked on the three generations of guys, and the young son really got into it and it was a delight to observe these three boys have some fun. The young girl watched them having fun and, lo and behold, she gradually joined in. I struggled to give her some ownership, and through some tried and true techniques, she participated. (!!!)

Another young mom with a toddler and a crawler also came in and it was delightful to witness their reactions. The young girl and mom had fun together as the very young boy started to explore, seeking out the room, the music, the instruments, the centers of activity.

There were lots of cell phones and cameras in action tonight. Per capita, too much. But the interaction among this small gathering was rich and challenging for me. I got paid my fee, worked the room and gave my CDs to the families that committed as an audience.

Another gig on the planet.