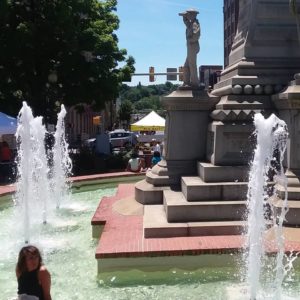 It was great to return to Easton’s City Square/Circle at the invitation of my friend Mike Duck (Not for Coltrane). It was a spectacular day and we set up in a nook among the many vendors at this impressive farmers’ market. I’ve tried valiantly to play here but I have been the victim of a vast ocean of local folks that play here. Thanks to Mike I got to reintroduce myself to the market.

I appreciate the chance to trade songs with Mike. I get to back him up on my mandolin, a rare and wonderful chance to pick on my Gibson. He, in turn, gives me a chance to bring out songs as I see necessary, especially if kids are on the radar. It’s what I do.

All of this happened. Mike has some new songs that are outside of my radar and he’s getting good at presenting them and playing them strong and clean. I got to play Billy Jean on mandolin for the first time.

I broke out the bag and soon had kids and families gathering into the space. One lad, perhaps a preteen came up to play tambourine. He was pretty serious about it. As I found some of Mike’s tunes beyond my mando skills, I picked up maracas and a tambourine, too, and I noticed that this kid was picking up on the beats. (His dad was noticing, too.) Eventually, his older brother came up and joined in. As I found out later, his older brother played in a garage band and it became evident that his little brother could play, too. These small things matter in real time.

Over the two hours, Mike and I traded tunes and the time disappeared, as it should among friends.

Later this afternoon, I have a gig back in the neighborhood at Holy Infancy’s Multicultural Festival.  Good start to the day.