I wish I could do these primary schools all the time. I had two morning assemblies in Lakewood, NJ, about 2 hours from home with about 250 kids and teachers at each show. We were in the gym.

I got there later than I wished (missed an exit on the GS Parkway in the morning sunshine) but knew I could launch on time. Lauren, the art teacher, was my liaison for this school and also was the person who moved the show back from three weeks ago (I was laid up with the hip). A most gracious woman.

These shows were for preschool, Kindergarten and First Grade, right in my wheelhouse. I really haven’t played a large solo assembly in a while, but I went with the strong stuff – cause it works. Sometimes this age group has never sung along, so I do my best to get them to sing – and, in a big gym, there’s less pressure to do so, especially when they hear the big sound of lots of kids singing. I had to pick on some of the teachers, though, to clue them in on the process.

There was a 90% latino group here in the heartland of NJ. Both groups responded wonderfully and the teachers were crowing on the performance. I get ’em riled up and active – just what this age group needs.

I chatted with the art teacher’s class (they were there for both shows) and asked what song they liked and they came up with You Are My Sunshine, one I wasn’t expecting (thinking they might say Cat Came Back from the previous show). Seems they just sang it at the school assembly a few days before. So they sang it, and I went back and played my guitar with them. It was then that I figured I would feature them in the second show. 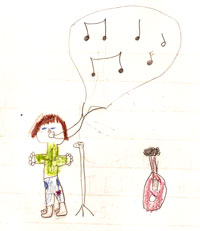 You Are My Sunshine is the perfect example of what a folk song is. They knew it well and had sung it on stage. So, after my usual opening songs, I started it out on the guitar and the entire first grade sang it with gusto. I then got them to stand up and sing it again. The energy level in the room was incredible, especially seeing the music teacher go nuts. (I found out he is a notable sax player with some pop star band experience – that’s why I enjoyed his reaction.) It was an inspired addition to the morning, thanks to being open to chat with the small class between shows.

It was a long drive, and the first large solo assemblies I’ve done in weeks. I’m pretty satisfied with my physical recovery, and glad to be able to perform well again. There’s still some weakness in the hip (5 weeks out) but, with a stool, I can get up and down for different songs.

It’s good to pay for play again, too.