This was the second stab at this program, the first being last November at the IceHouse, a rather challenged event with sound problems and a small turnout. That one was worth it, though, since it a good beta test on the set list, slideshow and concept. 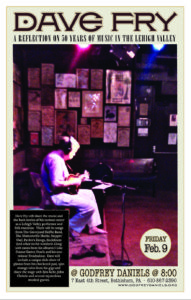 This one at Godfrey’s had the benefit of good publicity (a mention in the Morning Call on Thursday), a nice Jack Murray poster and Godfrey’s clientele. I invited John Christie, Chris Simmons and Hub Willson to come back for this one and my good friend Kris Kehr was available to join in on bass. Harley Newman also reprised his lunatic set, as well.

I set up the screen in the far corner of the club, borrowed the projector, connected the sound to Godfrey’s system and I was prepared to launch the evening. Having done this last year made all the difference and I was at ease.

As folks piled in, many acquaintances and old friends from the past came in and I shared my thanks that they came by. I’m always surprised that people show up for my gigs and I take time to acknowledge them all. 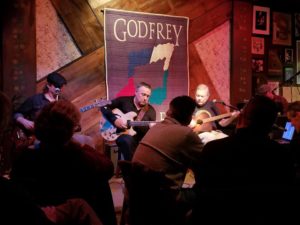 I decided to have the core of the band up for the whole evening. Last time I had in mind to gradually bring folks up, but I went the idea to just play the songs. John and Kris did their homework and I have trust in their abilities to play on the fly.

A few slides in, I started the music with The House of the Rising Sun, the first hard song I learned, a folk song that also was part of the British Invasion of the mid 60’s. A good opener with a good story. Chris Simmons came up for the Graveyard Skiffle Band/Early Sheiks set and we did Sheik of Araby, Sales Tax, The Dogs Meeting and The Barnyard Dance. The band did it fine, and Chris and I had some of that old chemistry going. 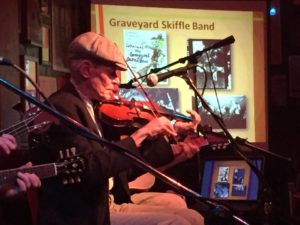 The Steppin’ Out! section feature tales of the tangos and we did Walking Stick. The Touchstone set featured The Cat Came Back with John’s nasty leads and great audience singing. For The Last Ditch Medicine Show set I turned it over to Harley and he did some short tricks with his inimitable corny humor. It was cool to watch the audience riveted to this unexpected part of the show. I have some cool friends.

The Out on a Limb set featured a very nice version of Mamma Wants to Barrelhouse from Bruce Cockburn, and it was a good way to finish out the first set on a strong musical note.

I started the second set with Bearly Loveable and The Bear Hunt. It was particularly funny to have the whole adult audience doing all the sounds, especially the turkey farm. It was a hoot. I followed with the RockRoots section, using the videos from the PBS-TV show with Jay Proctor knocking out the Motown Medley and then my rather amusing home boy RockRoots Rap.  Pavlov’s Dawgs featured Peter Rowan’s Blue Mule that came off nicely..

The next section was my time as a tweener at the Philly Folk Fest on the main stage. Sixty Minute Man with Wendi and Lauren from 2001 and I Wanna Be a Dog from 2005 during the full moon Saturday night show. Very few of my friends had ever witnessed this major part of my performance career so this was particularly sweet.

We got back to live music for the Murphy’s Trousers Celtic set with Don’t Call Me Early in the Morning, again with great audience singing. We followed with Giants (kids’ drawings of giants on the screen) and, again, it was a marvelous audience connections with their monster sounds.

I saluted my mandolins on the next slide and played my Jig Medley morphing into the Mickey Mouse theme. The Godfrey’s slide was a tip o’ the hat to Cindy Dinsmore. We followed with a strong version of How Legends are Made.

We rolled into the newer material from the Troubadour CD with Stan Rogers’ Giant, Bill Hall’s Rosie is a Friend of Mine and an my own Lessons from Pete as the closer. I thanked the band on music, Steve on sound board and Ramona on cash register and we walked off the stage.

There was a standing ovation. I’m not quite sure how to respond to this and I feel somewhat uncomfortable but I dragged the lads back for an encore. We killed Pay Bo Diddley with leads from both John and Kris. It was good to end with a rocker.

Lots of thanks from the wide variety of folks, and it is through their reactions I can gage the success of the show. I would like to reprise the show again sometime. It works really well.

A very curious thing happened after the show. Ramona asked me to come up a talk to the two young men who were at the show. I told them it was cool that they were the youngest folks in the hall tonight, and they proceeded to tell me that they are big Stan Rogers fans. When they heard Giant and Legends, they were going nuts, saying, “Who is this guy on stage?” This level of connection over the years between us was simply mind boggling.

I was exhausted by the end of the evening with too many moments to digest. I was extremely pleased with the 50 Year Retrospective: the concept and its execution, the support of my friends on stage and the incredible warmth of a full house at Godfrey’s