Today was a session with Kevin at Hybrid Studios to work on cleaning up the vocals that I had laid down six months ago while I was building the basic tracks for Troubadour, the tracks that everyone else would put their parts on top of. It was a good session, to revisit singing these tunes and being able to sing along with ‘the band’ for the first time. I’ve also gotten better on several of the tunes, as well.

Before I leaned into the vocals, I brought out my Strat to do some nasty chords on the Celtic tune The Crawl. Kevin dialed up a virtual Vox amp on the board with some nice distortion on it and I did my gnarly Celtic Rock power chords the the song and it came out nicely. Good direction from Kevin to vary the strum-ma strum-ma of the acoustic guitar with the power chords. It’s going to be nice.

Kevin and I had been listening to the cuts we’ve done already, so we were ready to attack the vocals. Several tunes we massaged with small corrections but, more often than not, I sang the whole song. The performance values were much better today and we had a good time coaxing better versions.

I remarked how nice it was to sing into a great mike. Thanks to various computer filters, I was singing into a $15,000 microphone. Here’s a picture of the real thing, but I sang into the virtual copy on Kevin’s set up. 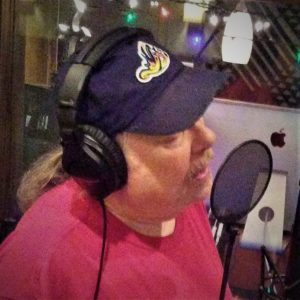 We worked on Smokin’ Babies, False from True, The Crawl, Louise, Giant and more. We did some wave form tweaking to sync up timing, volumes, etc. to really bring things together. It was four hours of playtime for us both; it’s a pleasure to work with a good friend who understands where we’re going on the project, getting a pretty sophisticated sound while maintaining the integrity of the songs.

This is going to be a fine album.