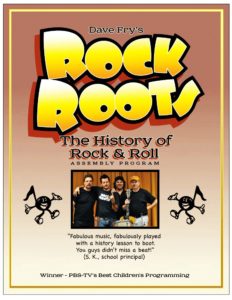 This is as close as it is to be ‘On Tour’ for me, driving to Somewhere, NJ for a couple of shows with RockRoots, my wonderful assembly program, now in it’s 28th year. We had two assemblies at an ES in Hawthorne in northern Jersey. We had a 1 and 2 pm show for around 550 K – 5th grades, a great age group to play for. The principal was very cool and explained that it was a strange day for the kids, with a false alarm fire drill, a half-hour wait outside in the cold with no jackets, and then, RockRoots. The kids and staff were primed to have a good time.

Both sets were fun, with different energies from the older kids first, and the little kids second. The principal and the PTO lady were appreciative and want us back annually. That’s saying something.

It was a long day with 4+ hours on the road and 2+ hours at the school. I was a tad frazzled getting back. I still have a Dave’s Night Out to do later tonight.