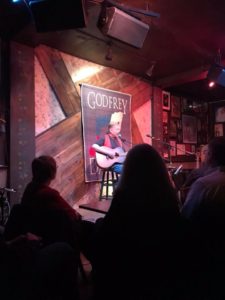 I’m glad I have an ‘in’ with the folks booking Godfrey’s so that I could open for my friend Craig Thatcher on Saturday night. Craig is the ace guitarist in our town and has developed a well-deserved following with his many shows including Clapton, Hendrix, Cream, Allman Brothers, etc. retrospectives as well as his own Martin showcases. He particularly loves playing this stage though, since it’s intimate and close. I get great joy in having superlative artists appreciating the club. No surprise there.

Nyke and Craig both added their talent to my new CD Troubadour so this was an opportunity to showcase some of those tunes for his audience. It worked out well.

Craig brought out two full houses tonight, a rarity these days at the club, so it was a pleasure to do my sets here in my living room for a packed audience. Since it was a busy night with a turn-over crowd, I was encouraged to make my set short, and Craig was gracious enough to allow three songs. I picked out Don’t Call Me Early as a solo, invited Nyke up to play fiddle on Giant, and bring Craig up for Lessons from Pete and then hand off the show to them both. Perfect. 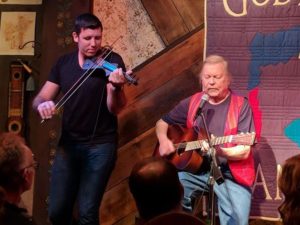 It felt great to hit the stage running with Don’t Call Me, get the audience singing and nail the song and the ending. Bang! Nyke came up for Giant and added his electric violin and spooky effects to the Stan Rogers’ tune. Nice improv on his part and I sang and played it strong. Again, a strong tune that would be new and novel to Craig’s audience. Lessons turned out great, with Craig’s leads, Nyke’s backup and my control and the message of the song. I think it made a fine impression on these new ears. I introduced Craig and Nyke to their audience and got off stage. Mission accomplished.

Normally I would have done different songs for the second set, but there was a complete turnover for the 9 pm show, so I decided to ride with the same set, especially with Craig and Nyke comfortable with the material. (Craig pretty much did the same thing for both sets – that’s show biz, ya know)

I had the pleasure of having some of Craig’s fans come up afterwards, complimenting my set as well as thanking me for creating this wonderful space. It was a good night all around in this magical room.