It was a yin-yang performance day for me today, starting off with a long drive down to Delaware for a noon set at the Harvest Moon Festival at a large farm/nature center. I followed my friends, The Druckenmiller’s on the stage.  Not much of an audience for them since families were roaming the grounds for the many activities, corn maze, pumpkin decorating and food. But, the music added a nice atmosphere for the festivities. 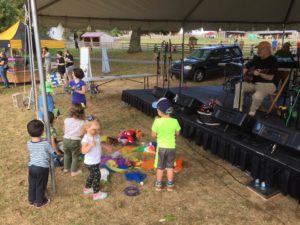 I started out with few folks, but eventually kids came up and started in on the bag. One particular young girl came up early on and supplied her energy that drew other kids in as well. It was a good set and appreciated by my friends John and Todd who booked the music for the weekend. It was a beautiful fall drive down to the Festival and it was great to hear The Druck’s in action. Tom and Betty’s son Nate came up from West Virginia for the gig and it was a pleasure to hear his fine backup guitar work on their old-time tunes.

I picked up a gig for the drive home a day before. There was a memorial service for a doctor who passed on in Pennsburg and I got a call from the funeral director. The family wanted someone to play Simple Gifts on a Martin guitar, and I said I could do it after my Delaware gig. The service was held in a large gym at the local YMCA and there were hundreds of folk who came by to pay their respects to the family of this good doctor. I was glad I brought my small amp for the song, especially since there was a fairly weak system for the speakers in this large space. I played and sang this rather short song and it fill the hall. The funeral organizers and the family were very please that I could do it. My new Martin sounded great.

In preparing for the presentation, I imagined that I would play the tune on the guitar, sing the two verses and then have the folks gathered sing the first verse at the end. One of the doctor’s sons came up at the last moment and asked me not to have the sing along. I certainly agreed but privately wished that the congregation had the chance to raise their voices in support. But, it turned out fine with this very simple but beautiful song. A few folks came up to thank me for the song. I don’t think I’ve ever been paid so much for two verses of a folk song, but it made a difference for quite a few people.

When I packed up to leave, my “new” car’s battery failed, and had I left my phone at home. A kindly 90-year old gent stopped by to help out. I used his phone and as we waited for AAA, we picked up a friendly conversation. I found out that he had a few cars at home, including a ’52 Jaguar and a mid 50’s Rolls Royce. That sparked some fine conversation as he smoked on his pipe. A nice lady stopped by with jumper cables and we were able to get my car going. As I drove my new friend back to his cheap car in the parking lot, he said that he was glad to help out and that it made his day to help someone. I added that he made my day as well.

It was a long day with 4 hours of driving with two quite varied audiences: a lively family harvest festival and a somber family memorial service.