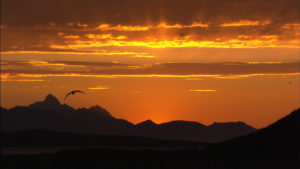 I hit the road at 5 am, crack o’ dawn this morning to head up to NERFA (Northeast Regional Folk Alliance) in Stamford, CT at a Marriott hotel. Clear skies, not to bad traffic for a Friday morning and got to the hotel around 7:30. I did some meditation in the parking garage (how Zen is that?) as the construction guys started sandblasting a flight above me. I walked into a relatively empty hotel lobby, with no open registration until 9 and sound check around then, so I found a couch in a corner, unpacked my guitar and played some tunes to an ’empty’ atrium. Nice acoustics, to say the least. As I was playing Giants to myself, a woman drifted over with her coffee and sat down, my first unintended audience of the day, and said, “That sounds a lot like Stan Rogers’ Witch of the Westmoreland. (This could only happen at a folk music conference.) I said that it was a Stan song, and as she listened, I said it was my morning meditations on guitar to got to get my ears and brain on the ground before the rest of the millenials woke up. It centered me for the day.

My gig for the day was a kids’ music showcase and  following panel discussion about this music. I linked up with Reggie Harris (thanked him for his rather amazing spot as a leading black folk performer in our field… he’s the best) and met Sally Rogers and David and Jennie from Two of a Kind. This workshop is a kind of ‘sacrificial opening act’ for the conference and a small nod to us folkies who seed the future with our kids’ music. (A tip to Sally’s seed song that finished out our workshop discussion.)  That’s okay by me and gives me an opportunity to be here.

We cleared the space for the 50 some 3rd grade kids coming from a local school, set up the sound system, shared knowing jokes about what we do and got the call that the bus had pulled in. Bring it on.

David and Jennie welcomed the kids, teachers and a few curious conferencees and the sound guy with their Tree Hugger song and then introduced Reggie. His presentation is highly refined, intelligent, engaging and a bunch of other superlative adjectives. He know what he’s doing. He had the kids singing, clapping and I got to take note of all the subtle things he does to teach, share and maintain control in a positive manner. A master, though he went too long for the situation, but…. I quite understand.

These kids were great and were a perfect audience for us. They were kids that were going to sing that afternoon at their school, so they were musically hip, to begin with, and Reggie’s set proved that. I knew this was going to be good.

I jumped up on stage, knowing I had to be crisp with my 15 minutes, posited my Pete Seeger “ears, lips and hips = community” jive and launched into Tutti Tah. It immediately shook the house. During the tune, I often save space to call out the teachers if they aren’t up, and I did. Bang. It’s a powerful, yet subtle moment, but I got great feedback on that moment from several of the folkie folks later on. I now had their attention.

I decided to do one sing-along and, of course, did The Cat Came Back. Again, getting the teachers to sing one of the verses by themselves, and mentioning community is a conscientious move that makes a difference. The song had a bunch of fine moments, as always, on several levels.

I took a chance with my last tune and went for All Around the Kitchen to get them up and moving. I’ve also found that kids are more dance-oriented these days with The Floss, Orange Justice, etc. and felt that this could be a good and concise closer (perhaps). It worked great but bordered on being a tad too long, so I got the nod from Jennie and closed it up with six or so kids who had drifted up on stage. “Embrace the Chaos”, sez I. A good and fairly tight set. As I walked off the stage, the sound man thought it was great, and that’s really who I’m trying to impress.

David and Jennie mercifully covered for us all by doing their wonderful fireworks applause and introduced Sally Rogers, a consummate pro and children’s songwriter. She did a dulcimer song, got everyone singing, picked up her guitar and sand another superlative world song. Her songs are truly amazing vehicles for societal change and a welcome change from my chaotic approach.

Reggie, David and Jennie, Sally and I came up for This Little Light of Mine, and Reggie did his great job of leading everyone in singing along.  It was a pleasure to look out on this gathering of kids, teachers, folk music lovers and a sound guy filling up a conference room with music.

I high-fived the kids as they headed out, chatted with a few folks and started setting up the room for the following discussion/workshop.

A great start to the day.