This is a pretty epic Sunday afternoon every year for the “music industry” in the Lehigh Valley, and it’s no surprise it’s held at the center of our musical industrial complex at Steel Stacks. It’s grown to be a big production these days and the LVMA organization continues to improve the whole shebang. It’s a rare opportunity to meet up with a lot of my friends and live music supporters, hear some curious live music, see new and old performers get recognized, and to generally schmooze the day away. Crowds in general, still bother me, especially if I’m performing though. (I’ll have to blog on that some time.) 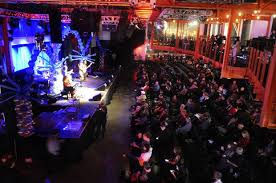 I’ve been honored many times over the years and appreciated the pat on the back from my fellow musicians. But, I admit to becoming a little jaded, mainly because I’m used to seeing extremely talented folks at Godfrey’s and at the Philly Folk Fest. I know my place in the greater folk music community and I’m proud of what I’ve done for it, but I’m no David Bromberg, Tom Chapin or Stan Rogers. That’s okay. A lot of the players here may not have the perspective I have.

I received a Lifetime Achievement Award in ’16 and wanted to perform on that day. The selection committee said they were full and awardees usually play the year after. Well, I got the brush off last year so decided to throw my hat in the ring for this year. Initially I was turned down but then got call a couple of months ago. I contacted Kris Kehr and Ed McKendry, one of my working trios, and they agreed to sign up for this two song set. Finally. 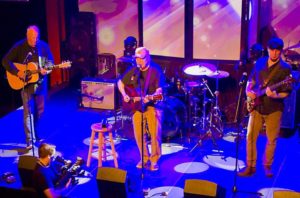 Wanting to play stuff from my new CD, I picked out Giants and Lessons from Pete, the former being a good audience interaction piece (few LVMA acts engage the folks) and the latter being an original tune with a good arrangement, meaningful lyrics and some crafty playing by Ed on the acoustic. We met up early and worked on tightening up our set to close to the 8 minute limit. (We came close to it and played the set well, in spite of an on-the-spot sound check) I have some mighty friends in Kris and Ed.

Mission accomplished. The audience in front of us appreciated our efforts though many of my fellow musicians were yakking it up at the bars on either side of the room. So it goes and it is expected.

The awards were dealt out over the afternoon and, early on, I was not expecting Godfrey’s to win, but Godfrey’s won, not only the Best Open Mike, but the rather startling Best Performance Venue. In past years the big boys have won – Musikfest Cafe and other bars, so it is particularly gratifying to have this small but mighty stage acknowledged in the larger music community. I wasn’t able to get to the stage in time to accept it, but it’s for the best that I didn’t slow down the show.

I  did make it up on stage to accept my Children’s Performer Award. I’ve gotten this regularly and enjoy picking it up live, with a thanks and a blown kiss to the audience. (They played my version of John Gorka’s Tell Me the Truth as I came up. That’s cool.) Both Robbi  Kumalo and Kira Willey are equally deserving performers, but it is a popularity contest. There is a respect I get from the older players, not so much from the rock newbees. The real players know what it takes to play for kids, it’s a rare talent and those who do, know.

I picked up my third Community Radio “Personality” award. The personality phrase is an outdated term from AM/FM radio days, so its kinda funny to wear that moniker. But I had prepared a small speech if I had the chance to speechify. I didn’t get to do it but I wanted to acknowledge all the community broadcasters on the four local community stations for providing a curated soundtrack to our lives. I was going to say, “Call them up, say thanks and get off the phone cause they’re busy.” I don’t think I deserved it the first time but now I’ve upped my game on WDIY. I worked for this year’s award.

There were many of the acts who played with ‘tracks’, a simulating a full band. I was not alone in thinking that this was below expectations. Do it live, or don’t do it at all. Cheap, but not unexpected at this level.

I also picked up the Best Folk Solo/Band Award. Again, measured against our own Anne Hills and other folks on the circuit, I appreciate the nod, but it’s a shallow pool here in the Lehigh Valley. I am good at what I do, perhaps as good as anyone around here and therefore deserving the award, but…….  Perhaps it’s time to retire this one, like James Supra did this year. (I knew him when he was Jimmy._

Mike Duck and I worked hard on this web site over the last year and I had hoped that it would win Best Music Website. It didn’t but not for quality reasons. I just don’t have the traffic among the voters for folks to recognize the difference. I was pulling for the award so that Mike could enjoy some recognition and future business from it, but it was cool to see it up on the screen.

I enjoy the awards, the congratulations from friends and fellow musicians, but what I really want to emphasize is the fact that I’m still performing at a high level, improving as a musician, recording artist and radio broadcaster. That’s what makes these days special.

It’s all a good thing, in the big picture.