I’m lucky to sneak into some very prestigious festivals as a kids’ performer and Saturday’s gig at the 50th Delaware Valley Bluegrass Festival is an example. My friend Jayne Toohey, photographer and Philly Folk Festival volunteer has asked me to do a family set at this festival several times, and I was glad, especially after the last few Covid years, to do it this weekend. 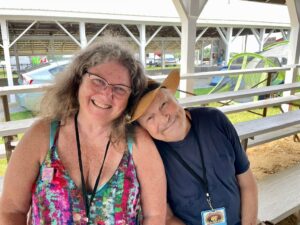 I do a set in an unused pavilion on the Salem County Fairgrounds as the main festival rolls on further away on the main stage. My scene is a dusty, saw-chipped empty space, better fit for cattle and sheep, with a section of bleachers up at one end, with a small sound system run by another good friend from my Philly folk relations, John Mac.

Another act, a clever Black magician Chris, was booked at 2 pm and he did his wonderful show before my set at 4 pm. He had a good crowd to play for (as do most magicians in this business), working in his tricks and clever patter. He’s really good at doing this. 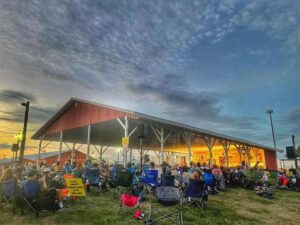 I set up my guitar, bags of instruments and puppets, and waited for my time. Nobody anywhere near this pavilion. As usual, I will have to start from scratch.

There was next to none in the way of promotion of the kids area, no mention on the web site and I even had to talk my way into the festival at the main gate. No mention of me with the powers that run the festival. So it goes.

At four pm, with nobody in the house, empty bleachers and a family picking some tunes just outside the pavilion, I started playing Shoo That Fly, apologizing to the family for interrupting their session, but I had to start somewhere. The folks were gracious enough to pull it in, and I continued for about 10 minutes until a mom and dad and their two kids stopped over and sat down with their snow cones. Here we go.

I opened up my bag of rhythm instruments and encourage the boy and his sister to join in. Gradually, a few more kids, moms, dads settled in and I finally had a basic audience to work with. I ended up with about a dozen kids and scattered adults to do my set. Scarves, puppets and instruments and a cloud of dust and chips. I finished up, and after the kids helped put my stuff away (it’s going to be quite a clean up later), I handed out CDs to all the kids, fist-bumped and packed up my stuff in my car. I hoped to catch some homemade ice cream and some bluegrass music from the main stage before I headed home.

I ran into some surprising folks while on site, including a woman who knew me from her wedding that Pavlov’s Dawgs played at back in the 90’s. I did remember the site at Mensch Hill outside of a small town in Berks County. We had a great chat about acoustic music, Godfrey’s, the state of bluegrass, folk radio and more. It was remarkable to run into someone that distant in my past. Deep connections. Only my friend Fred Gilmartin made the effort to search me out after my set, knowing several other friends were at the festival. So it goes. I know I’m lucky to have a small part (but a very nice payday) in this festival.

I could only take one set from the bluegrass band on stage, and drove off into the setting,  sun in rural South Jersey, headed for home on a beautiful Labor Day Saturday.