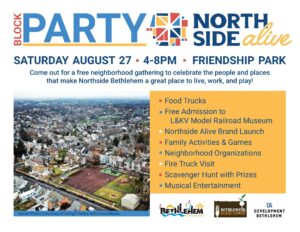 My friends at the Bethlehem Food Coop asked me to play for a block party on the North Side at Friendship Park, a small city park. I was signed up for a two hour set from 4 to 6 pm, and I was glad that it wasn’t terribly hot. I set up on the macadam under a pop-up tent with jump ropes and hula hoops spread out in front of me, with various community vendors spread out (Food Coop, Bicycle advocacy, etc.) and the mayor was on hand as well as various public servants.

I started out playing tunes with my handy dandy amp, mike and guitar. Gradually, folks drifted by and kids started to pick up instruments, and join in. Grandmothers, dads, moms, etc. joined in, played with the hula hoops and generally mixed it up with me. Doing my thang….

In these small, one-on-one situations, I’ve been breaking down a song and giving the kids a break on their rhythm instrument, and it’s been working out nicely. The kids sense that this is their time to shine and have been nailing the improvisations. A nice way to share the stage and create some magic with the kids (and the pride of the on-looking grandparent, too). It also stretches my material during the long set.

Folks appreciate having a sound track for the event, and watching kids and families having some fun making music. Adults I know in the community stop by and say hello. I even got to give a hug to my friend Gail who’s been estranged due to a political kerfuffle with her wife. I felt good that we were able to share that moment together. And that’s what a community block party is all about.