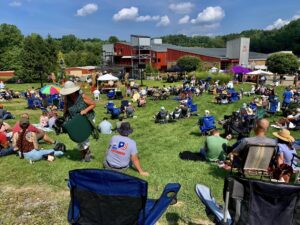 I was pleased to be asked to add a short set to the festivities at the rejuvenated Berks Fiddle Fest, post-Covid. It’s been moved from Topton’s community park to the old Doe Mountain ski slopes, now a resort, Bear Creek Mountain. I think the festival has lost some of its charm, as nice as the new digs are.

I was asked to do a thirty minute set in between the various fiddle contests. I followed the 13 – 18 age category. The slope area formed a nice amphitheater, and there was a nice crowd out in front of me, though the sun was pretty brutal today. I set up my guitar and did a quick sound check and launched into Don’t Call Me Early. During the song, I asked for a choral response and got absolutely nothing. That kind of gave me the information I needed for this challenge.

I followed with Blue Mule, and during my introduction I asked for the people’s favorite tall tale, and, again, I got nothing back. I rolled into the song. glad to do a bluegrassy type of tune. I then did Branching Out, again asking for a call and response during the refrain. Nada. I gave up and just sang my own response. 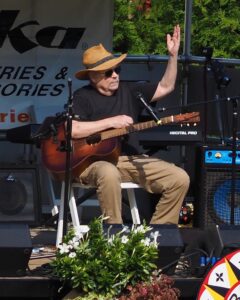 Next was Giants, and finally got the audience to give me back “They’re Big, They’re Bad” and the spooky noises. I got a little vindication on this one. I got the “one more song” nudge from behind the stage and finished with Lessons From Pete, mentioning that getting kids to sing along, dance along was the whole point of what I try to do with kids (and these adults), trying to create a deeper community connection. 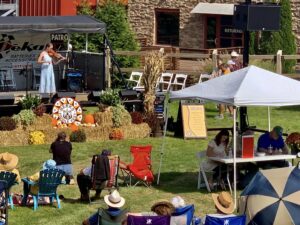 I played well (only one repeated verse) and thought I did a good job. It was pretty hot and felt drained after just a half hour.

As nice as the new venue is, the festival has lost the communal nature, and I experienced that with my inability to get folks to chip in. In some messaging later on from some of my friends who go to this festival to hang out and jam, the feeling was mutual. No trees to play under, escape the sun. One friend said he played under a ski lift, not exactly the idyllic setting one would hope for, for a fiddle festival.

Still, it was nice that the three fiddle sessions on stage brought out folks who were willing to get up in front of people and try their best: some excellent players, some beginners but all willing to take a chance in front of strangers. Good for them; too bad for the audience, though. So it goes.