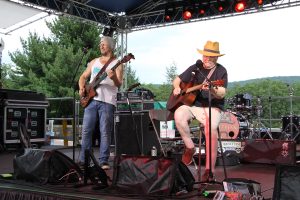 This was one of the good ones of the year for me, essentially my only professional set at Musikfest this year, with my good friend Kris Kehr on bass. This marked my 39th MF and I believe I’m the only one left to have played them all.

This set was kicking off the Tuesday evening at the new Stadtplatz (the old Americaplatz) and I was able to link some of my old gigs at that site over the years during my set. There was some light rain in the forecast, so there was a small crowd on hand (several folks coming in to see the Americana band following me), but a noticeable group of young families with grandmoms in tow. That turned out to be a great factor in how the set turned out.

I was a little concerned about my duo set at this stage, since most of the other groups were much louder, band-oriented groups. I had asked Craig Thatcher to sit in a few days ago, but he is quite busy with his many gigs during the festival. As it turned out, Kris and I had an excellent sound crew and, together, we had a nice, phat sound ourselves. We were able to fill the arena appropriately. 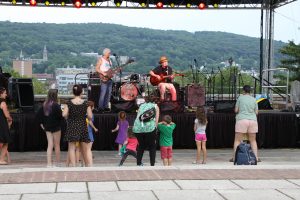 I had gotten wind that several friends were going to bring their grandkids so I front-loaded the set with some kids’ material. After opening with Don’t Call Me Early, some of the kids and families started to drift up front of the stage. I went into Shoo That Fly,  and folks started to dance. That energy captured some of the older folks in the back, and certainly gave Kris and me a boost. I followed with Summertime Blues, We Are Welcomed and then into the kids’ stuff: Giants, I Like Peanut Butter (with my goth story) and We Gave Names. Eventually, we had a nice, comfortable mosh pit of kids and grandmoms and a few dads dancing in front of us. (I should have brought in my bag of scarves and instruments, but, alas, I was traveling light for this one.) 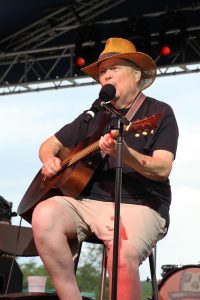 Having changed my strings before the gig, my Martin was really holding its own in the mix, and coupled with Kris’s bass, I felt energized by our wall of sound. We drifted into my adult material with Nadine, Giant, How Legends are Made, Rosie is a Friend of Mine (with the story about Rosalie’s pregnancy announcement from this stage in 1989) and finished up with a very strong Lessons From Pete. I featured Kris’ lead bass on several songs and I believe his leads surprised and entertained the audience. He was great. Nice back-up vocals, too.

All in all, we did a great set with all the elements of what I do best: family material mixed with strong adult songs, a full sound, strong acoustic guitar chops, interesting banter that was site specific and great visuals with kids dancing in front of the stage. I am quite proud of how it turned out.

It was nice to have some folks come up after the show with legacy stories.

From Joe Ann: Aryana, my granddaughter, and I enjoyed your concert today. I’m sure Ary will continue to enjoy your music as her dad and aunt (our son and daughter) did when they were her age! Thanks again.
These things matter.