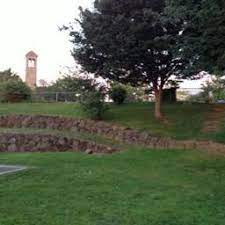 Young Audiences scored me a couple of summer gigs in Wilmington, DE. I was looking to get out of town anyway. It was another 90 degree day and I’m lucky to have a air-conditioned vehicle.

When I got there, I met up with the liaison for the recreation folks in town, working with the big theater outfit as part of their community outreach. Seems Sid knew of me from The Philly Folk Fest, having worked on the Archives Crew. We had quite a few common friends, and struck a great conversation about Fest as well as David Bromberg’s moving to town. 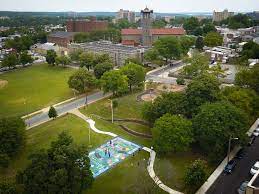 Father Tuck Park is situated in the neighborhood Little Italy and I enjoyed catching up on the lay of the land. Big Catholic church up the hill from the park. We set up in a shady glade with Sid’s small generator purring away. I didn’t expect any kind of crowd and was willing to forgo the sound, but we went with it anyway. It turned out that having a presence in the neighborhood was important.

There were only a mom and young daughter and a daycare teacher with two girls and a young boy. It doesn’t matter since I work with what I got. Still, its hard for the kids to relax when it’s such a small group. The two girls eventually loosened up nicely and were dancing at the end. The mom was a former preschool teacher so she and her daughter were already primed.

It was a long day, with three hours of travel and an hour show, but worth it to soak in some of Little Italy on a hot day. I’ll return later in August to another Wilmington park.