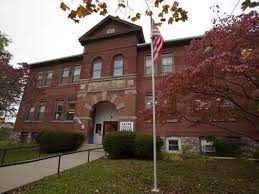 I returned to a nice daycare center on the northside of Bethlehem for three sets: K and 1st, toddlers, and the older kids. Each set provides its own challenges. We were on the lawn on the side of the school, made in the shade on a hot day.

The first set with the K’s and 1st graders is always a gas.  The K’s are still adjusting socially, so they don’t really know how to sing along, but the 1st graders are ready to rock. The toddlers are there to observe, so I play to the teachers, and they get it. The older kids gave me something extra to work on today.

I always learn something from every gig, and I stumbled upon an interesting way to engage the tweeners at a kids’ assembly. The older kids don’t like to be played down to, while the younger kids are ready for anything. Today, I started out not playing guitar and talked about body sounds. I started out with my hands routine, different ways of snapping, rubbing, clapping. I expanded that to knee slaps, mouth music, and others. I then invited one of the older girls to come up and lead the “orchestra” and she launched right in with a great variety of claps, rhythms and more. She took charge and everyone followed along. I asked an older boy to come up, and sure enough, he responded with a great set of sounds and rhythms – mostly call-and-response – including the ole under the arm pit fart sound. Classic!

I took some time to point out what had just happened – the creativity, the spontaneity, the leadership involved. I gave up my role and became a participant. The teachers were surprised as well.

As always, at the end of each session, I asked what the kids liked (Tutti Tah, Peanut Butter, Giants) and then asked the teachers what they like best. Those responses are really enlightening for me and I think valuable for them as well.