I was set to kick off the Summer Series of Educational programs at our local PBS TV station on Tuesday – two shows at 10 and 11 am for a decent amount of money. There were vax and mask mandates for the building but that was fine with me. I got to the studio in plenty of time and, with few families signed up, we decided to ditch the sound system and go acoustic. Cate, my good friend and educational liaison for the station greeted me warmly as ever. I set up and waited.

A few minutes after 10, Cate came in and said that the few families that showed up didn’t have vax papers and left. I was disappointed but quickly said, “Can we do it outside?” Cate said why not and quickly scrambled to tell the families walking away. With the help of the crew, we set up on a large patio out front of the station and gathered the few folks for the show. 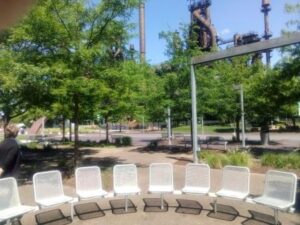 My view of the Steel Stacks arena.

It was a spectacularly beautiful day and the setting was wonderful.  I introduced myself to the three moms and five kids. I opened up my bag of instruments and started in with I Like Peanut Butter. Away we go! The next 50 minutes were quite rich, and as I worked with these folks, Cate and other members of the staff were delighted that we were able to save the situation. They took lots of photos for later promo.

I gave away a bunch of CDs, autographed them and then waited for the folks to show for the second show. In the meantime, Cate and I had a great chat, talking about my TA skills and experiences, her time as a Catholic school teacher and my recent viewing of the Fred Rogers documentary “Would You Be My Neighbor?” Eventually, we realized that no one was going to show up for the show, so we wrapped up my equipment and I headed back to the car.

As I was writing up my set list for the day, I realized that I need to get some of my material back in shape from a two-year layoff. I Wanna Be a Dog wasn’t on the tip of my brain anymore, and I had to listen to my CD to remind myself about The Bear Hunt, both of which were “no brainers” just a few years ago. I’m getting older.

I felt good about the session, Cate’s support of my work with the station, and the beautiful day.

Cate also cut me a check for a much larger sum of money, since TV-39 wasn’t going to do the big series during Musikfest this year. She more than doubled my fee for today. I am blessed.