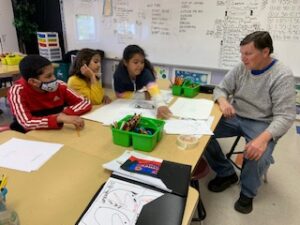 Bill Christine, Katie Santoro and I came down to the final day to wrap up our Climate Change residency at Marvine. We had to document the project for Doug Roysdon in order to give him the ability to market this process for prospective funding, so we had an hour and a quarter to finish it up. 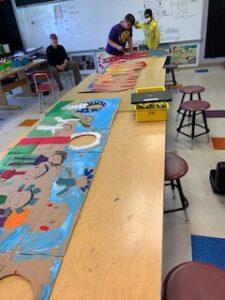 Doug was able to arrange to have Al Silvestre to bring his camera for stills and video, something I was particularly glad for, since I was prepared to take videos with my own equipment, while trying to interact with the students. Whew!

We decided to break the studio sessions into three pieces. The first manageable slot was to record the kids doing the Who Dat choruses for the four verses. One older girl proved to be a problem, saying that she didn’t want to be in no video. I had to prod her several times, often doing my mean ole grump to convince her to look like she was smiling. (I eventually apologized to her and she eventually relaxed).

We’re the Brezz Family, here to save the day. 2x

I’m a Wild Fire in the forest, better get out of my way. 2x

We rehearsed and did several takes and managed to get some good footage, but it was an introduction to production for these kids and it took a lot of focus and energy to get through this.

Next up was recording the verses with the kids in the cardboard “costumes”. With the help of Doug and Bill, we were able to put together the kids moving behind the cut outs, adding construction paper props, working on “faces” of the characters, etc. We decided to skip the kids singing and went with my guitar as the sound track, to add the lyrics later. This turned out to be a very successful and rich session. 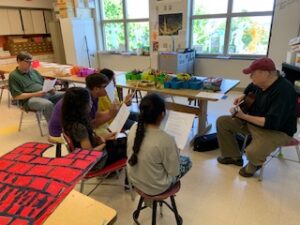 Working on the lyrics for the song.

With only about fifteen minutes left, I turned to working with a fifth grade boy as the narrator, and have him be the vocal actor doing the verses. We did them out loud and then had him do them solo. That worked really well, and, though the verses were new to him, he was able to pick up on the inflections and delivered nicely, to the delight of everyone listening. He really stepped up. We’ll be able to sync his narration with the guitar sound track from the earlier video. We might be able to pull this off.

I hope that Al does a good job editing his version of the song (we still have to find funding for him) and I plan on working on my version of Who Dat? for my own purposes (and the fun of home productions). Doug hopes to put together a short video of the project in order to find more work for us all.